The Aurealis Awards shortlists were announced today, and the judges have put Song of Scarabaeus on the Science Fiction Novel shortlist!

These are Australia's big SF&F&H literary awards, started in 1995 by the publishers of Aurealis magazine. There's a gala event in Sydney on 21st May to announce the winners.

Song of Scarabaeus is not (yet?!?) published in Australia but you can find it in online stores (see here for a list of retailers that currently stock the book). 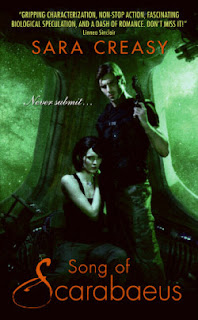 Two features about the SF Novel shortlist this year: there are only 3 nominees, the other two both being for books by the ever-prolific and popular Marianne de Pierres (her 6th  & 7th nominations), and the fact that a woman therefore is going to win! Looking back over the 16-year history of the awards, only one other woman has ever won this category (Maxine McArthur in 2004, for Less Than Human -- NB. read her Time Future/Time Past books!).

For several years from about 1999 I worked on Aurealis magazine, as a copyeditor, slush pile reader, and eventually associate editor. It was a remarkable experience, helping me in both a writing/editing capacity, and in introducing me to the work of dozens of Aussie authors. Now that I'm back in Australia, I hope to reconnect with the SF community here -- when my little one deigns to give me time off -- and being nominated for an Aurealis Award is a fantastic way to come home.

Excellent news! Hope you can make the awards in Sydney. Fingers crossed for you and I can't wait to read the sequel.