I've been keeping track of my total word count since I started writing the sequel - here's the graph. This shows daily totals rather than words written per day. The latter would be a bit more impressive, but I've been deleting so much of what I write that the total word count is rising very slowly. (Makes me grouchy.) That big drop a few days ago was a 17,000 word deletion... yikes!

What do you do?

House-hunting these past couple of weeks has given me several opportunities to say those words I've always wanted to say. We're looking for a house with a room that can be used as an attractive, conducive-to-writing office (as opposed to just a spare boxy bedroom with no view, or even worse a corner of the living room, which is our current situation).

Our two most promising houses so far do have nice writing rooms - one has a so-called "library" complete with built-in shelves and a sort of priest hole, and the other has a long bay window - both overlooking lovely gardens.

So anyway, each time we walk into a house, the first thing my husband says is "Where's your office?" Which makes the agent say something like "You work from home? What do you do?"

It would be more accurate to say I work part-time for a dot-com, as that's where the money comes from (the Eos contract is still in the works), but... "I'm a writer." I like saying that.
No comments:

Today my editor, Diana Gill at HarperCollins, rang to introduce herself. It's great to finally make contact and learn a bit more about Eos and the process my book will undergo from this point forward.

Diana was excited about the announcement that Eos author Adam-Troy Castro has won the Philip K. Dick Award for Emissaries from the Dead. I'll have to take a look at that one.

And I was excited because my sale to Eos was announced today in Publishers Lunch! Kristin wrote the following blurb:

"Sara Creasy's SONG OF SCARABAEUS, about a young woman kidnapped by fringe world mercenaries for her ability to terraform planets and who must choose the life of her reluctant and permanent bodyguard over her freedom to Diana Gill at Eos, in a nice deal, in a two-book deal, by Kristin Nelson at Nelson Literary Agency (NA)."
No comments:

Over on PubRants, Kristin is blogging about her client Janice Hardy's YA book, The Shifter, and the rigmarole surrounding its title changes. I don't know if my book will get a title change (it hasn't been mentioned yet) but everyone I've met either mispronounces it or asks how it's pronounced. I'm not saying there's a right or wrong way to pronounce it, there's just the way *I* pronounce it (sca-ra-BAY-us). At a guess I'd say many don't know how to spell, i.e. google, it, either. Which means my title was probably a bad idea.

Always a good idea to google invented words, because there's nothing new under the sun. I did not take this advice. I now find that Scarabaeus is the genus name of the dung beetle. My biology degree let me down badly. Wikipedia: "The genus Scarabaeus consists of a number of Old World dung beetle species, including the 'sacred scarab beetle', Scarabaeus sacer. These beetles feed exclusively on dung". Okaaaaay...

Not that there's anything wrong with eating dung exclusively (if you're a beetle).

Scarabaeus is also a computer game "released for the Commodore 64 in 1985... The storyline features an astronaut and his dog [his dog??!] who become trapped in an Egyptian tomb..." Now this makes me all warm and fuzzy with nostalgia. Around 1984 my brother, sister and I bought a C64 (our dad paid for half). We never had an Atari or played Pong, but now we had a real personal computer! With a cassette tape to load up programs! I wrote a Basic program that played cricket (sort of) - my programming skills never progressed beyond that.

During one of my last rewrites of Scarabaeus, I decided to change the title to Song of Scarabaeus. The idea came from the main character Edie's experience of the datastream that she jacks into as part of her job. I knew when I started writing that I needed an analogy to describe this experience. For example, in The Matrix, Neo sees the code as vertical lines of glowing green numbers. In the novel Night Sky Mine by Melissa Scott, code is represented with holographic animals (hard to explain but it makes sense if you read the book).

I knew I didn't want a visual analogy so I went with an aural one. Edie "hears" the datastream as melodies and harmonies. When things are out of tune, she knows something is wrong. Every program has its own tune, or "song" - hence the title change, because the planet Scarabaeus is run by a sort of program, too.

When it comes to the names of characters and various other words I made up... that's a whole other post.
No comments:

Last night we played Domaine (board game) for the first time. I grew up on Monopoly and Canasta. I never really got into computer gaming but we have several friends into board games and have a weekly opportunity to play. I am not great with strategy games so my two victories at Domaine must have been sheer luck.

Last week we played Giants (set on Easter Island, and I came last), which has the cutest game pieces I've ever seen. So many games these days cut costs by using wooden cubes for game pieces. We got into Puerto Rico last year, and I headed off to Michaels to buy beads to replace all the cubes that represent the various goods (coffee, indigo, corn, sugar and tobacco): 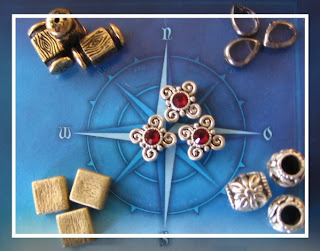 and purple glass pearls for the colonists (aka slaves): 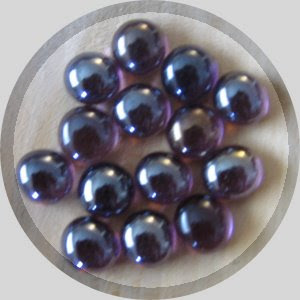 I'm also writing my own game - science fiction, of course - but I think I need more experience with various game mechanics before I sort out exactly how mine will run.
No comments: