Where in the world I am

If you're on Goodreads, Song of Scarabaeus is this month's Book of the Month for the SFR group read. Join the discussion here (I've been popping in with a few bits of trivia).

I've also written my monthly blog post at Supernatural Underground - read it here.
No comments: Links to this post

A (long) while back I posted a pathetic illustration of one of the decks of the Hoi Polloi, the rover ship from Song of Scarabaeus. I worked from illustrations like that to keep the layout of the ship straight in my head (although there's a goof at the end that slipped through editing and proofreading - my only excuse is that the scene as written was a late addition to the book).

I've since made some not-quite-so-pathetic illustrations and it's time to share. If you, like me, are truly obsessive about this sort of thing, behold and enjoy. (Click to enlarge.) 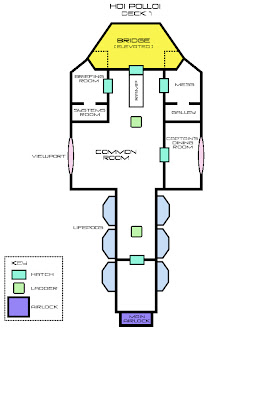 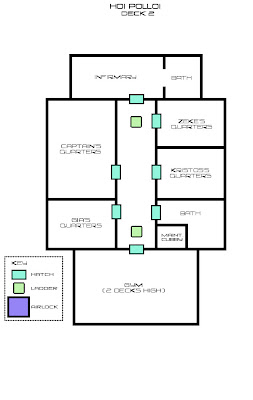 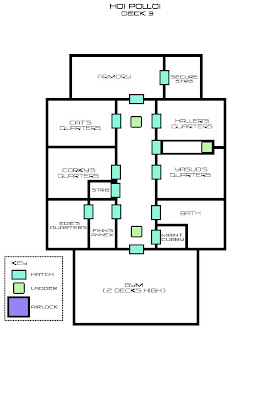 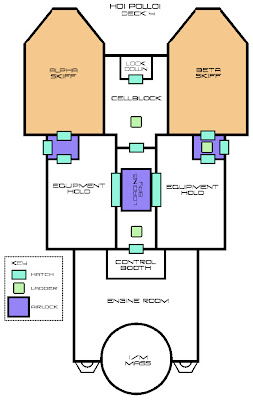 Notes:
These drawings are not remotely to scale, but FYI there is a reference in the book to the main corridor on Deck 3 being 40 meters long. You have to assume there are all sorts of little cubbies and access tubes and other Very Important Spaceship Stuff and whatnot in between the crew quarters, for example, because I'm here to tell you: those rooms are not each 10+ meters on a side.
Alpha Skiff airlock is where Edie is momentarily trapped with some serfs during the fight in the equipment hold.
Beta Skiff is the one Edie and Finn are marooned in, halfway through the book, and to get there they take the shortcut to its airlock via the extra ladder.
1 comment: Links to this post

I've seen all these movies (although I paid no attention while Attack of the Clones was on) and didn't notice any of these. I think I'm much more tolerant of science goofs in movies than in books, and much less tolerant of biology goofs than physics ones anyway.
No comments: Links to this post

My sister is reading my book. This may not sound so very amazing to you, but it's pretty phenomenal. She doesn't read much of anything, but she's reading my book! Now, my dad, he doesn't read fiction at all either and he read my book, but he was kind of obliged to seeing as how it's dedicated to him. But my sister?!

She texted me some questions about it, like "What happened to the boy who never got his lunch?" If you'd read the first three chapters of Song that got axed (written before I learned that a story should start where the story starts), you'd know what that meant. Which reminds me, she must've read a very early draft of at least the first chapter about 10 years ago.

Anyway, my sister is reading my book! She wants to know what happens in the sequel and will there be more books and will Finn and Edie get it on?
3 comments: Links to this post

My editor Diana Gill at Eos gave a nice quote to Omnivoracious about why she bought Song of Scarabaeus:

"It’s smart science fiction about biotechnology, with a strong heroine, and reminds me of the C. J. Cherryh books I read and loved growing up."

Song of Scarabaeus has been nominated for the Philip K. Dick Award. To say I'm in shock is an understatement. My li'l ol' book?!

Congratulations to the other nominees. I will rush out to buy Elizabeth Bear's Chill. I haven't read anything by the other five but their titles look interesting. The full list:

Check out my new wall art... I had posters made of both my covers and they're now hanging over my desk. They look all glossy and amazing. I included some surrounding bits of my workspace for scale. (To the right is baby's mobile that's too delicate for her to be near, much as she loves to tug on the emu's foot, so it goes on the wall as well.) 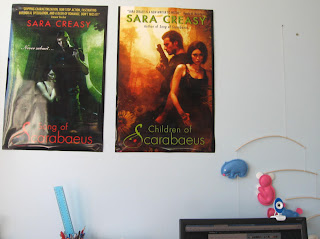 SciFiChick.com has listed Song of Scarabaeus at #4 on her Top 10 Science Fiction Novels for 2010. Wow! Her original review of the book is here.
No comments: Links to this post