When I made a trailer last year for Song of Scarabaeus, I found a huge selection of wonderful royalty-free music on Dano's website here, and used a piece in my trailer.

Dano read my book and must have loved it because he's put it on his Top 5 List of Best Debut Sci Fi Books! "I completely loved the depth and detail of the visionary scientific imagery."

A few months ago I was sent Chris McGrath's amazing cover artwork for Children of Scarabaeus - I like it even more than the previous one. It's Finn and Edie in a jungle, and Finn has a big rifle. Yum.

The cover is now in HarperCollins's catalog and here it is for all to see... 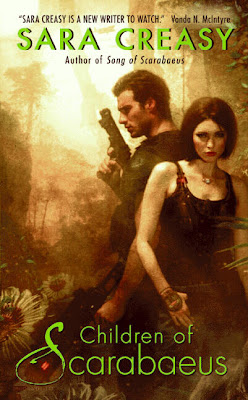 Thanks Tez for the heads-up.
4 comments:

How many neat bows do you like to wrap up your story threads?

I have two takes on this. No one, including myself, likes to see an important plot point, particularly an interesting one, die halfway through the story with questions left unanswered. Even minor characters and plot elements need some sort of resolution so it doesn't look like the author just forgot about them.

But if things are too neat, if the story is tied up so completely that there's no wiggle room for what happens next, then my imagination goes to sleep. I don't always want to know exactly what's going to happen next. I want to imagine it for myself. This is why I wish The Matrix saga had ended after the first movie - humans hadn't won yet but they now had the means to win. The filmmakers pointed the way and it was fun to think about how our hero might achieve success.

At the end of Song of Scarabaeus, there are a couple of plot elements left hanging. One is rather important (a character is dying) and arguably demands a sequel - the "cliffhanger". But in this case, the characters discuss exactly what they're going to do to resolve the cliffhanger. If there were no sequel, the reader could assume they did just that, and succeeded. In other words, I pointed the way. I don't really see it as a typical cliffhanger.

The second unresolved plot point isn't a cliffhanger but it follows that same idea. Our heroes have obtained the means to help lots of people. They discuss exactly how they're going to proceed, so the reader can assume that's what they do. (Of course, in reading the sequel you'll discover things don't go according to plan.)

There are other plot elements that could be considered unresolved, I suppose: Will our heroes evade the Crib? Will the leash be cut? Will Finn and Edie get it on? Well, I had to leave something for the sequel! And the story works without precise descriptions of "what happens next." If there were no sequel, I love the idea of leaving the reader to imagine what happens next.
No comments:

Copyedited manuscript is reviewed, fiddled with, amended, sent off, and done with! Having had a good break from it for a few weeks, I rather enjoyed re-reading it (previously I was thoroughly sick of it).

Here in Melbourne it's finally warming up. I packed only short sleeves because I hadn't anticipated the cold, and while I've made do with borrowing my mum's clothes, baby Sophie hasn't been so lucky. The baby stores are all out of winter stock so she's been rotating the same three tops since we got here. The best thing about the weather - whether it's cold or merely cool - is that it's not so stinking hot we can't take her for walks every day. Walks are just not possible during the Tucson summer. And now she's old enough (4 months) to appreciate them.

A word about Facebook: I'm about to change my account to family only, as I've decided to use it to chat privately and keep up with far-flung relatives, while this blog is for chatting about writing.
No comments:

This is the view I wish I had as I work on the copyedits for book 2. In fact it's the view from the back of my sister's house in West Gippsland, Victoria. MCP says it reminds him of Ohio (except for the mountains), while it reminds my family of England because of all the green. Either way, it's a whole different look from the southwestern desert of Arizona that I've become used to over the past few years. 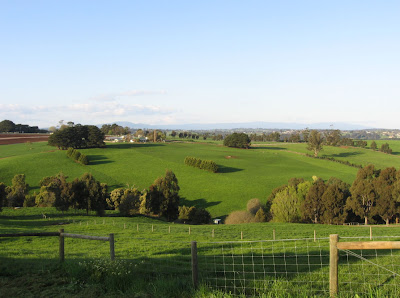