Today I'm blogging at Supernatural Underground about 2010's sf&f movies - help me decide what to see, because I saw almost nothing this year!
No comments:

Games for the season

A lot of people are posting their Best of 2010 reading lists, but since I didn't read much this year I'll post my favorite games of the year instead. These didn't come out in 2010 and I didn't necessarily play them for the first time in 2010 either, but they stick in my mind.

If you're a huge fan of Monopoly and other "roll the dice and move" games, you might not like these. Then again, I grew up playing Monopoly and now love the new German board games from the likes of Rio Grande. These games often include the mechanic whereby everyone in turn chooses what to do and then everyone does it, rather than everyone doing something different based on their dice roll. Many also include an element of cooperation as well as competition. We taught my 12- and 15-year-old nieces to play the first three games on the list this week, and they picked them up quickly and enjoyed them a lot.

Carcassonne - Use hex pieces to build roads, fields and cities; cooperate or conquer for points.

Kingsburg - Influence the king's advisors to obtain resources, build buildings and hire soldiers that help you defend the realm against annual monster attacks.

Bohnanza - A deceptively simple card game in which you plant bean fields and harvest them at just the right moment for maximum profit.

Settlers of Catan - Another very simple but addictive resource-based game (there is a sci-fi version of this that I haven't played but I've read that each player gets a 6" tall mothership - yowza!).

Puerto Rico - Produce crops on your island plantation using slaves... ahem, colonists, and ship the goods back to the old world.

Age of Empires - Choose actions, collect resources and colonize countries in the new world; convert or conquer to expand your colonies.

And some sci-fi ones...
Race for the Galaxy - Explore and settle new worlds, produce and sell goods (a neat little card game that MCP always wins).

Ad Astra - Explore and mine planets for resources to build spaceships and colonies.

Galaxy Trucker - Silly but fun game where you build a spaceship out of jigsaw pieces, then face various dangers to see how it holds up.
1 comment:

Galaxy Express is having a holiday blitz giveaway. Head over there for two chances to win signed copies of my debut novel Song of Scarabaeus. To give readers down under a chance to read the book, which isn't easily available here, this portion of the contest is open to Australia/New Zealand residents only. Just comment on the blog post to be entered. 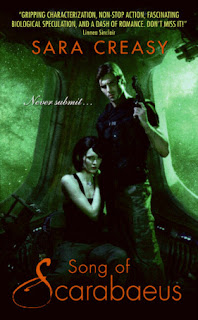 My 12-year-old niece is staying with us for a few days. She's a big reader who's ploughing through Harry Potter a second time because she ran out of books. This got me thinking about the books I enjoyed before high school English lessons spoiled reading for me. To be honest I was generally more interested in Lego than in books, but here are a few I remember:

My other job... no, not being a mum, although that takes up more time than anything else I do... I work/telecommute part-time for an online 3D art company that sells 3D models to create images and animations - mostly aimed at hobbyists. The professional version of this you've seen in  movies like the underrated Final Fantasy, which is wholly computer generated, or Alvin and the Chipmunks, which combines CGI and live action in a fairly obvious way, unless you believe in talking chipmunk actors.

(The company is DAZ3D and its rendering software DAZ Studio is free, for anyone who's interested.)

Anyway, these days I have little time to render computer art, and in fact I just deleted (temporarily) the software from my PC because it was taking up so much room I couldn't defrag. But I thought I'd show off some of my work that's gathering cyberdust on my hard drive. These are random images from as far back as 2002, and don't relate directly to my writing. Click to enlarge. 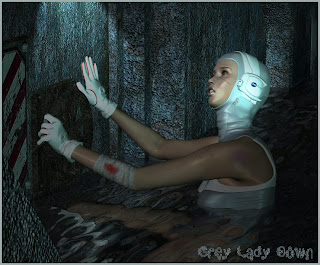 I saw the movie Grey Lady Down in the 1970s, when I was probably too young because a certain scene has haunted me ever since. This is a sci-fi interpretation. 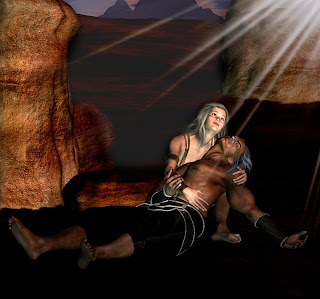 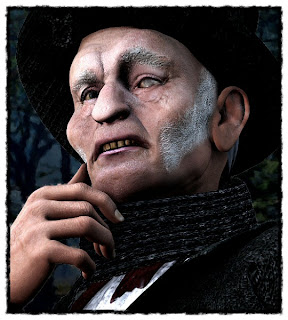 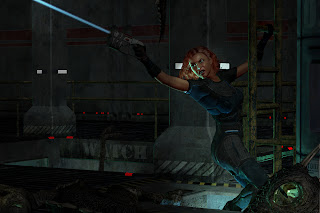 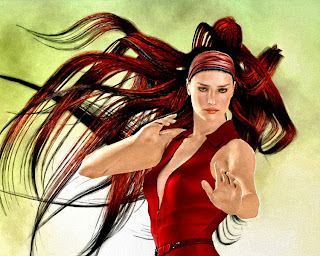 Nathan Bransford writes about the physical and creative benefits to writers of exercise.

It was a dark and stormy  night... Well, afternoon, and neither dark nor stormy but what we English call "close" - overcast, humid, drizzling on and off, too cool to be classified as "muggy". Baby and dad were playing together and all was right with the world (except for the weather). 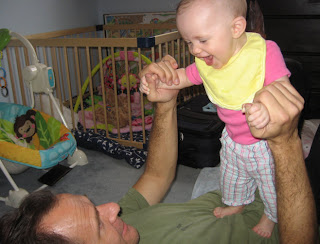 (She's always trying to walk but at 6 months old it's not quite working out yet.)

Just half an hour later, when they were still in almost the same spot... 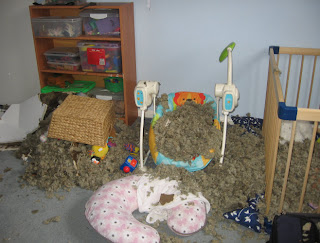 The sky fell in.

Scary stuff for any parent. That chunk of wet plasterboard on the left flew across the room and it was heavy. Now we have a 2 x 3-foot hole in the ceiling, a laundry full of washed-up toys and teddies, and a Man coming tomorrow to assess the damage. (MCP has a pic of the hole itself on his blog.)
No comments:

It's up! Read chapter 1 of Children of Scarabaeus on my website as well as the back cover blurb. The book will be out March 2011.
4 comments:

Aussies - where to buy

Want to buy Song of Scarabaeus in Australia? The following online stores are listing it (just in time for Christmas). Check each link for the best price (don't forget to include shipping) and whether they actually have it in stock. In some cases they have to order it from the US and that takes a couple of weeks.

Borders
Fishpond
Emporium Books
QBD
Galaxy Books
Dymocks (they claim it's in stock at the Collins St, Melbourne store and Rundle Mall, Adelaide, but call first to check)
Booktopia
Angus Robertson
Seek Books
Book Depository (in the UK not Australia, but tends to have super cheap books even with shipping)

John Scalzi is giving authors the opportunity to mention their books on his blog - see the comments section for tons of gift ideas. (I'm #100.)

And io9 has a list of ten SF&F book ideas for Christmas. I haven't read a single one of them because I'm about 4 years behind on my reading list, but I like the sound of these four in particular:

For the Win, by Cory Doctorow
The Dream of Perpetual Motion, by Dexter Palmer
Digital Domains: A Decade of Science Fiction & Fantasy, edited by Ellen Datlow
Under Heaven, by Guy Gavriel Kay
No comments:

I am a twit

I am on Twitter. I know not wherefore or really how it all works (WHAT is a retweet?!), but here am I: http://twitter.com/#!/SaraCreasy

We are soon to become a multi-author household! MCP will blog about it soon but suffice to say his agent told him it's time to get a professional headshot.
2 comments: