I've been reading Elizabeth Moon's Vatta's War series. Currently finishing up book 3, Engaging the Enemy. The series revolves around Ky Vatta, daughter of an interstellar trading family, whose father gives her a ship after she's thrown out of Fleet Academy. The ship, though, is bound for the junk yard - not much of a first mission. Everything goes horribly wrong, of course, and by book 3 Ky is not so much trading as assembling a fleet of privateers to take on a bunch of pirates who are menacing the trade routes.

The books have a quasi-military feel but are mostly what I label "procedural" - very detailed descriptions of ship life (from the captain's perspective, anyway) including finances, trading deals and other interactions. The first third of the first book, for example, is simply a series of shopping trips to prepare for the voyage. The action amounts to only a handful of incidents in each book.

If I've made it sound kind of boring... well, this is not the usual guns-blazing all-out action you might expect from "sci-fi adventure", especially that with a military flavor, but I'm finding the series compelling for a whole other reason. The worlds are incredibly well realized, and it's easy and exciting to imagine what it might be like to live in them.

One gripe: no romance for poor Ky! She's too busy saving the galaxy... 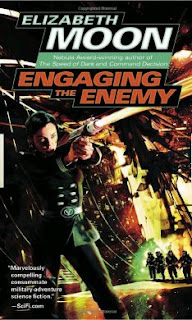 Having read the entire series--more than once--you will quite enjoy it. And, yes, while procedural, I will simply say that there will definitely be more action in your future reading.