"The Publisher shall consult the Author regarding the cover design..." Thus stateth my contract, and last week my editor asked me for cover ideas, so today I emailed her my "consultation." Basically, that means I scoured Amazon for sci-fi book covers and explained what I liked and didn't like about them.

In general I prefer a more stylized cover rather than a "scene from the book". The latter runs the risk of looking out of context and just plain bizarre, or alternatively too generic. I love hardware and hi-tech sci-fi stuff, but that typical "spaceship and planet" concept is wrong for my book. My idea is for something organic (since the story concerns alien ecosystems) merged with technology. If the title sticks, I guess there should also be a beetle on there somewhere.

In case the stylized thing doesn't fly, I listed scenes that could be illustrated. This most likely would include the main characters. In the book, I deliberately don't describe them in detail because I prefer books where the reader can imagine someone of their choosing in the main roles. But for the sake of the cover, I did provide descriptions, with photos of two people (a not-so-well-known singer and an even-less-well-known actor) who could (physically) fill the roles of Edie and Finn.

Now, of course, I can't wait to see what HarperCollins comes up with!

The most outrageous cover I ever owned was for an edition of John Wyndham's The Chrysalids. I haven't read the book in decades but have never forgotten the story. It concerns a post-apocalyptic society in which genetic imperfections are not tolerated. A group of children have to keep their telepathic skills secret in order not to face banishment or execution for this abnormality. The cover depicted... a green ant-lizard-monster.

In googling for this cover, I've discovered the book was titled Re-Birth in the USA. I also discovered very different covers from several other editions, so here they are... 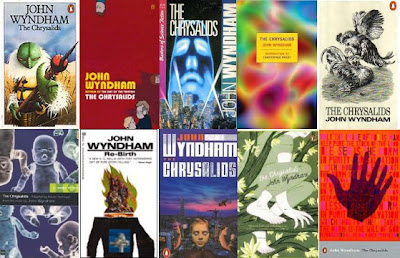