Sci Fi on TV and other thoughts

I heard the other day that Sci-Fi channel is changing its name to SyFy in July because the bigwigs think science fiction equates to nerds and geeks, and SyFy is sexy (makes me think of syphilis - oh well). Seems to me an excuse to show even less science fiction than ever.

Anyway, as I type the series finale of Battlestar Galactica is on. I watched the series in 1979 along with Buck Rogers in the 25th Century - I was easily pleased as long as spaceships were involved. I started watching the new BSG but lost interest because it seemed to revolve around a supermodel Cylon. So I don't have a clue what's going on in the finale (seems to be a lot of close-ups with people talking seriously to each other). I started googling a bit and landed on a page about Stargate Universe, which starts later this year. I thought the Stargate movie was dreadful but watched the entire TV show on DVD last year. I wasn't as interested in Atlantis.

In this new show, the third in the Stargate franchise, the crew gets stranded on a spaceship far from Earth and they have to fend for themselves (I'm not the first to call it Stargate: Voyager). I looked up the seven main characters (5 guys and 2 girls, of course) as I didn't recognize any of the actors' names, knowing before I even clicked on the IMDb links that the 2 girls would be super-hot and most of the 5 guys would be character actors (i.e. not hot).

I don't really have an opinion about this one way or the other, except to say I wish there were more female character actors (read "actresses over 35") allowed on TV. One of my favorite sci-fi women is Frances Sternhagen's Dr. Lazarus in Outland (with Sean Connery, 1981). I love the movie, too, although I'm probably in the minority there. It has a cool poster. 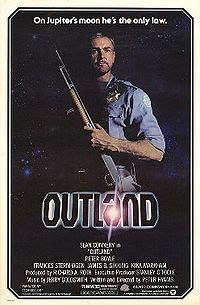