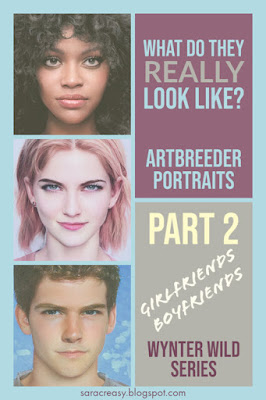 A few more characters I created using ArtBreeder, an A.I. face generator. Check out Part 1 for the Fairn boys, Wynter, Xay, and more. Again, there are minor spoilers here regarding relationships.

Here are Caleb's girlfriends and dates from the series... and whew, I didn't realize there were so many until I put them all together like this. (I omitted the mystery Canadian girlfriend because we never actually met her.) Bea was the harried single mother with dreams of marriage. Nicole was the colleague from Florida who raised Wynter's hopes, but only had one date with Caleb. Anita was Caleb's high school girlfriend for a few months, became Wynter's down-to-earth counselor, and went with Caleb on the trip to Arizona. Olivia was "sunshine", according to Wynter, but Caleb nipped it in the bud after a few weeks. And Kim... well, there's still hope... 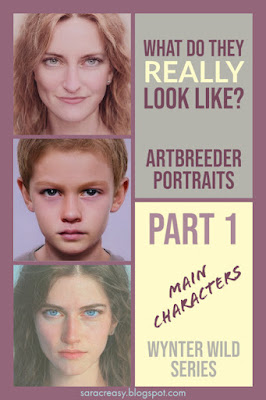 After a bit of fun making avatars of my characters, I've moved on to Artbreeder. All I can say is... wow! "Real" people that don't exist!

One use for Artbreeder is to "breed" any two images together (such as a cat and an octopus, which was the first thing my daughter did). So you could upload "parent" faces and create "children" - but in my case I just wanted to visualize my book characters.

Creating faces is not entirely under the user's control - you can't tweak a nose exactly the way you want because you're mostly adding or subtracting "genes" from different parts of the world. But you can easily get photorealistic portraits with a few twists of the dials.

So, here are my results - just my impression of how the characters look, for my own amusement. Most of these characters are related to each other one way or another, so for many I started with the same "base" and fiddled with the age, gender, hair and eye color, etc.

[Mild spoilers ahead for the later books in the Wynter Wild series.]