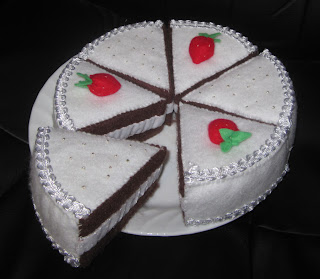 awesome felt cake! iv been tryn to find play food for my daughter made from renewable resourses & id discrbe the range in shops as LIMITED & EXSPENSIVE! iv cme acrss felt food but it looks unrealistic,yours is the best iv seen! could u post pics of ur other creations & patterns if possible?

There are some good patterns here http://www.feltcuisine.com/ (not free) although I haven't tried any of them. I made up this one after looking at loads of pictures of felt food (just google "felt food" images). I have made a couple of cupcakes that were precursors to this - practice pieces not worth posting! Things like this are really just made from circles and strips. I think it's all in the decorations and finishing touches.