Been feeling nostalgic lately - perhaps brought on by Christmas shopping for my 16-month-old (she'll be 18 months at Christmas). Wow, have toys changed since I was a child! The best toy I ever had was a xylophone made from blocks of plastic. You could stack them with the metal xylophone keys in any order, then drop marbles down the middle of the tower. The marbles bounced back and forth as they went down, playing the keys.

I played with that toy from a young age until I was about 12. I can't find it anywhere now. My nieces and nephews have marble runs, which are always fun, and I've found you can get (expensive) wooden marble runs that incorporate xylophone keys, but not in the same way.

To console myself on behalf of my daughter (who is too young for marbles anyway), yesterday I bought her a wooden kitchen on eBay for Christmas. Today I opened the box to check all the pieces were there... and what the hey, I decided to put it together 8 weeks early. It took two hours but I did almost the entire thing by myself (MCP helped out with the hinges and a few tricky attachments). I ache all over from crouching on the floor. But it's the cutest thing in the world. My baby is obsessed with all things housework, which I suppose means I must be finding time to do some chores around the house, or she wouldn't have the role model to copy. She loves putting things in and out of the washing machine (including things that were never meant to be washed), mopping the floors and windows with her special cut-down mop, cooking Cheerios in her tiny pots and pans and serving pretend food at her teddy bear tea parties. So the kitchen was a must. 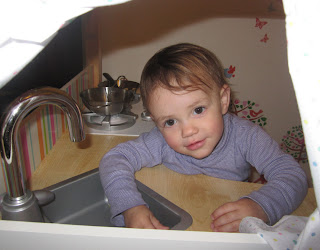 Let's call it a Halloween present. In Australia there is no trick-or-treating, so she doesn't get to wear a cute costume. She gets a kitchen instead. In this pic she's peering through the curtains over the sink. This thing also has a stovetop, oven, microwave, fridge, freezer, washing machine, pegs for pans, knobs that turn and click - even a chalkboard and phone.

With her birthday being in June, I get to shop for cute things every six months. I can't wait! (Seriously, I have not been able to wait - I already have half her presents for the next three birthdays and Christmases.)

But back to nostalgia: when I was four, the girl next door had a penguin slide. These things are rare as hen's teeth in Australia, unless you're prepared to pay exorbitantly. It's actually cheaper to order one from the UK and pay the shipping. Then last week I walked into Sam's Warehouse to buy $2 gardening gloves and found a penguin slide for $8! 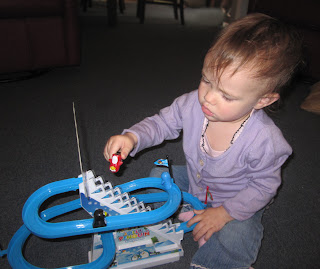 This is rather too advanced and confusing for a baby, much as she loved it - she kept "helping" the penguins up the steps, to their detriment. But I have fulfilled my childhood need for a penguin slide.