This weekend was my dad's 80th birthday. We four children put together a little booklet with 80 things in it -- our childhood memories of him (like the huge bonfires he built every year on Guy Fawkes Night), his pearls of wisdom ("Never leave a wingnut in the gutter";  "Hamsters don't go to heaven"), and his little quirks (such as his obsession with logging every penny and cent spent on petrol, and charting the fuel efficiency of his vehicles over the years).

He's a retired chemical engineer, able to build and fix anything. In fact he spent yesterday afternoon re-engineering croquet hoops with a blow torch and sander so the grandchildren could play a game when they came over for his party. He's put up more shelving and cup hooks for us than any man should have to in a lifetime. He dug up and leveled our entire quarter-acre lawn at the house in England. I do not know why, but I'm sure his engineer brain drove him to it. 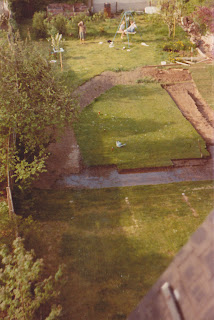 The above photo of the half-completed job was taken (in the late 70s) from the roof, which he was wont to climb on occasion to fix the tiling. No small task on a three-storey home. He climbed all the way up on a very long, narrow, scary ladder.
He's also an artist, lately expressed through photography, but he sculpted and painted when he was younger. When my sister, at a very young age, painted a face on the bathroom chair, he had to be angry, of course, but took a photo of it for posterity. 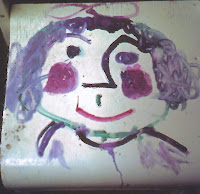 I dedicated my first book to him because of his willingness to answer any question -- a child's curiosity and a parent's patient indulgence help imaginations to grow. If he didn't know the answer, he took a stab anyway using logic (working it out from first principles) and common sense (drawing on his vast engineering knowledge).

He's had a huge influence on my life, which becomes more and more apparent to me as I get older. 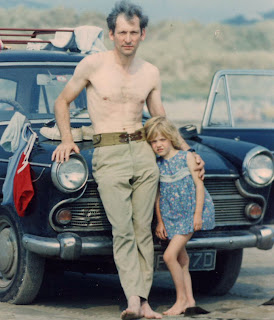 Me and my dad, on a beach in England with "Black Cindy"

You both look kind of disgruntled in that photo - perhaps thinking "You call that a beach?!" ;-)

If it has dunes and sand (not shingle), it's a pretty good beach, as British beaches go.