I'm sure every writer wishes there was a way to get their brilliant thoughts into a Word document exactly as intended, perfect first time. Instead most of us labor away at a first draft, delete and rewrite endlessly, and then tinker (so-called "polishing") for far too long after that to end up with something that's not even halfway as fantastic as it was when our brains first thought it up.

There's no magic device to achieve the first stage -- the first draft -- but I have a tool that seems to work wonders: an Alphasmart. 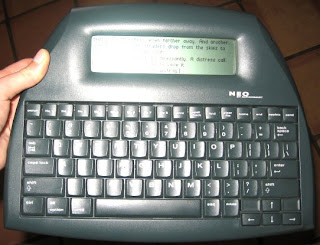 It's a keyboard, nothing else, with six lines of text displayed in Courier font. No mouse, no formatting, very few editing tools (cut and paste, basically). It's these limitations that make it work for me -- I just write. I don't care if it's crap -- it takes too much effort with cursor keys to fix it anyway. (Using the computer, I spend most of my time going back to fix stuff I already wrote, which doesn't make the draft grow any longer.)

I can write at least 1000 words an hour like this, sometimes twice that. I know it's very rough stuff, but at least it's a draft. Writers write, then they edit. The Alphasmart stops me doing both at the same time.

(The Alphasmart is also a nifty travel companion -- light and robust, with a battery that lasts literally for months.)

Also check out the "Write or Die" program. I regularly write 500 words in 15 minutes when I use that on normal mode. I just wish it had a RTF function.