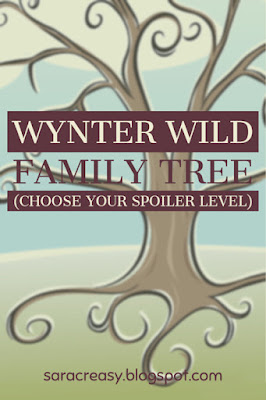 In true soap opera fashion, the family tree in the Wynter Wild series gets bigger and more complex as the books progress and secrets are revealed.

Following on from this post where I described a few family entanglements revealed in the Wynter Wild books (ones I hadn't plotted out from the start), in this post I'll present increasingly spoilerific family trees as a visual aid. To avoid spoilers, you can stop when you get to the latest book you've read...

If you've read the first two books, this is how the family tree looks. Wynter is the daughter of Miriam and Malcolm, and has four half-siblings from her mother's first marriage to Harry. Miriam's heritage is unknown. Joy is married to Sean, and left him at the ashram. 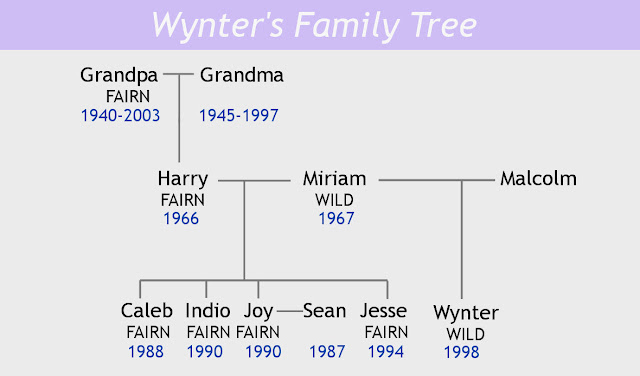 In the third book we learn that the Aussie boy Wynter knew at the ashram is Harry's son from an indiscretion with Ember, and therefore the half-brother of Wynter's half-siblings. 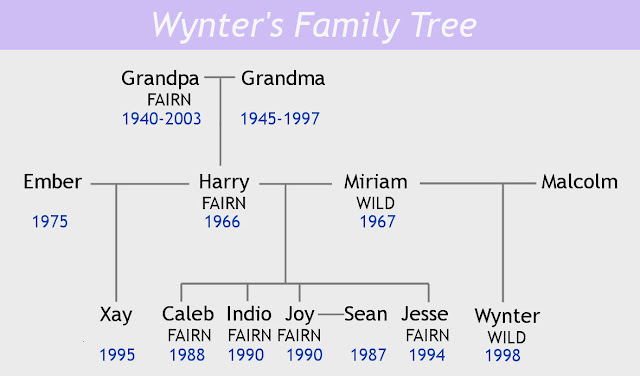 Yet another sibling/half-sibling is added during book 4... 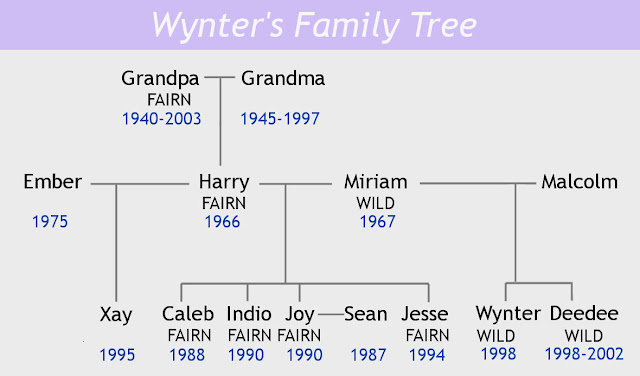 A whole new branch of the family tree is discovered during this book when Miriam's past comes to light, so if you've read it you can get things sorted out in your head by studying this color-coded diagram (for the most part, colors represent sibling groups).
Miriam's previous identity is revealed, along with her siblings, parents, and uncle, and Wynter's father gets a second name. Our main characters get four cousins, and Patricia and her cousin Neville, who were "family friends" before, join the tree.

Someone gets a death date, and a baby arrives (unknown name or sex):

One small but far-reaching change here - the removal of Malcolm's name after Jesse tracks him down. And baby gets a name:

I could put the ultimate all-encompassing family tree here but... you'll have to read the last book to find out! It includes two rather signficant changes/additions.