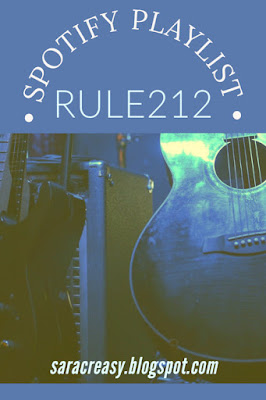 I've made my Rule212 playlist public on Spotify - take a listen below. You can also follow me on Spotify to find other playlists related to the books:

I've resisted being too specific in the books about Rule212's sound, beyond a vague "indie rock" (which could mean anything these days) and a lot of electric guitars, which moves them more into the hard rock category. Or nu-metal, post-grunge... whatever new-fangled label seems applicable. So this list is "representative" of their sound but don't take it too literally.

I'll add more songs when I think of them, as there's definitely not enough riff-based music, and too many ballads...

Compare to Xay's playlist, which is more straight-up hard rock with an emphasis on powerful singing.

I chose these songs for many reasons, but more the instrumentation, harmonies and feel rather than specifically how the singers sound. A few provisos:

I attempted to order the songs as you might hear them at a live gig - starting off dramatic and intense, cooling off in the middle, then finishing lively and fun. (I made that up. I don't know how musicians arrange their setlists.) But there are too many slow numbers. So, Invictus is the finale song, and the six tacked on the end are perhaps a separate acoustic gig.
Sit back, relax, and enjoy - but don't you dare pull out a lighter for the ballads! Indio will have you thrown out.