Broken Strings (Book 9) is Out Now! 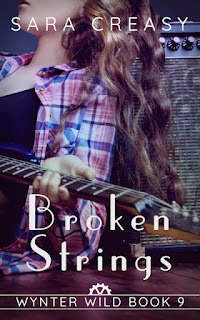 This was probably the hardest book to write in the series so far, for two reasons.

Firstly, because it was the first book where I was starting from scratch. While I wrote half a million stream-of-consciousness words a few years ago that became the basis for all ten books, once I put the scenes in order, I only "completed" 8 books before I started publishing book 1 on Wattpad. I don't really mean completed, as I was rewriting and editing (and adding thousands of words to) the books as I published them, but essentially the plotting and two-thirds of the writing was done.

Book 9 had a bare-bones plot and a few scenes written, but I was writing on the fly for the most part, and under a little self-imposed pressure to keep updating regularly on Wattpad (where it was uploaded chapter by chapter every few days).

Secondly, one of the character in this book takes a tumble. It was painful to put him, and his family, through it. I was determined to cast his fall from grace in a sympathetic light, because I don't believe in trashing characters I and readers have come to love. Still, as he grew weary and depressed - so did I.

A worldwide pandemic didn't help. I'm congratulating myself for setting this story a few years in the past, so Wynter and her family won't have to deal with it in the series. I can fully imagine Jesse rounding them all up on a weekly basis during lockdown to live-stream Rule212 mini-concerts.

Broken Strings (Wynter Wild Book 9) is out now worldwide on Amazon. Here are the links: