The Book Your Reviewer Wanted to Write 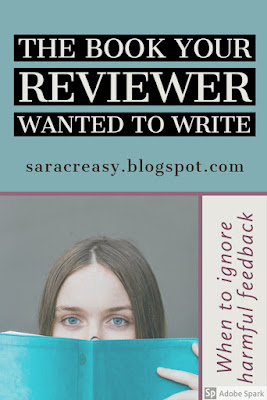 Today I finished Broken Strings, book 9 of the Wynter Wild series. As I prepare to sink deep into book 10, I'm looking back at the previous books and the perpective I've gained as I think about the genesis of the series and the early feedback I received that could have, if I'd listened to it, changed the trajectory of the story. Just like Caleb, who had to decide what he was willing to overlook to get what he wanted, I want to talk about where we as writers are willing to compromise when we encounter feedback on a manuscript (from beta-readers and other sources) that may have been offered from someone in the wrong frame of mind.

This post will make a bit more sense if you've read Little Sister Song, because I'm using, as an example, the early professional feedback I received on the manuscript. However, the principles for recognizing this sort of feedback apply to any story you've written that means a lot to you.

Reviewing another's work is an art in itself, and I highly recommend it as a skill worth learning. It can't fail to improve your own writing. However, as the recipient of feedback, recognize a reviewer's biases. I'm not talking about political bias or sexism or any other -ism. It's far more basic than that: it's when the reviewer is giving you feedback based on what they would've written instead of accepting that you're telling your story as intended.

Before we get into that...


A word about genre

I started writing the series in May 2017 and churned out half a million words in a few months. From these random scenes I created seven (later ten) books and in January 2018 sent a draft of Little Sister Song to my agent.

She wrote: "I absolutely love Wynter, Caleb (and Jesse and Indio)! And your writing/voice is terrific." BUT... Don't you hate the buts?... she couldn't identify the genre. Famous authors can bend genres any which way, but unknown authors will have a much tougher time selling books that don't fall neatly into a box. Booksellers want to know where to shelve the book, and even online stores need to put the book into a category.

Along with a developmental editor who also provided feedback, this was their conclusion: To shoehorn my book into Young Adult, I should use only Wynter's point of view, make her older, include a high school romance, and focus much more the cult.

Or, to turn the book into a family drama/women's fic (in the vein of Liane Moriarty), make the characters more psychologically complex, with overt reference to their "wounds" and arcs. And raise the stakes! This means high drama - kidnap, rape, murder, infidelity, etc. Spending four years in foster care, or in Joy's case being excommunicated from her beloved "church" and losing her mother's capricious love, weren't dire enough consequences.

For some writers, altering their vision to conform to a genre is part and parcel of their business plan. In my case, for this story, making the recommended changes might've increased my chances of selling the book to a publisher, but it wouldn't have been the same story.

Not all feedback is so directly related to a book's "sellability". How to recognize when a reviewer is unconsciously directing you to rewrite your book according to how they would've written it?

Feedback that's unnecessarily specific and detailed could be a sign the reviewer is trying to rewrite your story the way they would've written it.

The clearest example in the feedback I received from the developmental editor was that I needed to make the cult a much bigger presence in the story. Cults are intrinsically a great dramatic vehicle. Brainwashing! Imprisonment! Child brides! But here's the thing - my story wasn't about the cult. It was about a girl from a isolated background who emerges into the real world. The reason for her isolation wasn't too important. There are plenty of cult stories out there for readers who are interested, and in fact I do have a particular interest in cults - but Little Sister Song was something else.

Judging from the detail she went into, I would guess the editor also had a particular interest in cults. "If you’re going to 'go cult' in this story," she wrote, "then you have to GO CULT" (followed by 1200 words about cults, with links). She wanted the source of drama and emotional tension for every character to be the cult, which would've entirely changed the purpose and feel of the story.

Ripping out the heart

What about the reviewer who disputes characters' interactions and decisions because she would have reacted differently?

As writers we create characters with backgrounds and personalities that mean they don't always react like we would in a given situation. They don't form relationships with others the same way we might.

The one thing that kept me writing this series through nine (so far) books is the relationship between Wynter and her brothers (and between the brothers themselves). If the relationships you write are important to you, beware of feedback suggesting changes that could rip out the very heart of your story.

As an example, the editor wrote that Caleb and Jesse seem charmed by Wynter as "an adorable idiot" and view her like a new puppy, even referring to her as one (Jesse says of her tai chi, “She looks like a hungover puppy doing slow-motion ballet.”), rather than them having "real humanizing thoughts" about her.

It should be clear from Wynter's very first interactions with Jesse (along with his POV chapters) that his brain doesn't work the same way as most of us. He does, in fact, see her as a sort of puppy - and promptly sets about training her! As for Caleb, he's raised two teenage brothers in unusual circumstances so it takes him a while to adjust his thinking to cope with a traumatized girl in his home. His focus is on his duty to her, as family, and on her physical needs (food, medical check-up, new clothes, custody issues).

Indio, in contrast, treats her essentially as a peer and by the final chapters she's instinctively learned he understands her best.

I could've written these relationships as fraught with tension for whatever reason (and in later books they certainly come under strain), but just as this isn't a story about a dangerous evil cult tracking down an escapee, it also isn't a story about how Wynter wins over her brothers. All three of them are absolutely primed to accept a helpless girl into their midst because of their specific personalities and backgrounds - Caleb out of duty, Jesse out of scientific curiosity, and Indio out of a deep-seated need to connect with someone who, in some form, fills the void left by his mother.

As writers we should be looking to the heart of our stories, that "thing" we wanted to talk about, the thing we built our fictional world and characters around, and we need to decide whether we're prepared to compromise on that thing.

Take risks with your characters

If your characters aren't making sense to the reader, it might be because you've been too simplistic or sloppy or contradictory. Or it might just be that a reviewer wants the character to be someone they're not.
The editor's feedback on Wynter through the first few chapters was that she's robotic, emotionless, lacks critical thinking, and is hard to connect with as a complex, interesting human being. What I was being told here was to make Wynter less weird (or "more like me"). My response:

she’s been told she must fit in to survive, and so explicitly decides, after washing her past down the drain, to “be someone new”, a blank slate seeking to create a new identity.

Indeed, in later books we learn Xay called her a “mechanical doll” and she names her first band the Clockwork Toys. Even though the story is mostly from her point of view, the reader isn't meant to immediately identify with her because she is kinda weird. That initial sense of distance is the same thing her brothers and schoolmates feel when they meet her.

The editor's suggestion to humanize Wynter was to give her "ultra-sharp intuition" resulting in her making sense of the world in "complex, surprising and illuminating" ways.

The problem with that? Given Wynter's impoverished upbringing, this intuition would make her, at 14 years old, not human but superhuman. What I gave Wynter instead was the insight, thanks to the time she spent with "normal" Aussie boys at the ashram, that she's not normal, that she doesn't understand relationships or the world or even love, which is why she allows herself to be molded by others. Wynter's choices and relationships throughout the series would look entirely different if not for her decision on day one to recreate herself from scratch.

Is your reviewer trying to coerce your story to conform to stereotypes as a quick fix? I blame Hollywood for this. In a two-hour movie, there isn't time for extraneous details. If a movie character is an accountant, it's usually a shorthand way of telling the viewer he or she is bland, socially awkward, and anal-retentive. If a movie character is in the Coast Guard, we expect him to rescue someone from drowning at a key moment.

In a novel, we can be more subtle about our choices because there's time to develop background on the page that a movie can't explore. The editor felt Caleb's career was "arbitrary" because he never rescues anyone from drowning. My response:

We see how he rescued Bea, we know he rescued his brothers, he’s about to try to rescue Joy and Wynter. Jesse even explicitly states: “He rescues people for a living.” Coast Guard was so thematically on-the-nose I almost changed his career at one point.

I gave him that career as a metaphor for how he's lived his entire life, and even then I second-guessed myself.

And second-guessing yourself is really what all this comes down to. Understand the heart of your story - the reason you wrote it, the reason it keeps you awake at night - and hold onto that heart no matter what a reviewer, editor, agent, or random Amazon reader says. Decide your goal and, most importantly, decide how much you are (or are not) willing to compromise your story to achieve it.
Read more
Useful Free Internet Tools for Writers
Personality Typing for Characters
Formatting Your Indie Print Book
Genre Expectations
Naming a Ten-Book Series
And just for fun... Caleb's House Rules