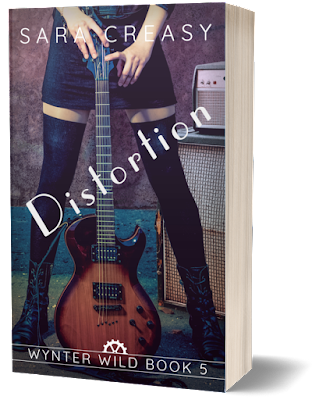 The fifth book in the Wynter Wild series, Distortion, is out now in paperback!

In this book, Wynter puts together her first all-girl (well, not quite) band. While she'd love to be playing just about every song with the amp turned to 11 to maximize distortion, the Mail Order Chicks play mostly 80s and 90s British pop. This story also sees the genesis of the rock band she puts together with her brothers.

"Distortion" refers to how the siblings' mother, Miriam, has affected her children by her actions years ago. Particularly for Indio, he believes the ongoing absence of maternal love is what has formed him, rather than the abandonment itself:


She was the negative space in his life, the loss and yearning that pushed the rest of him into distorted, unfinished shapes.

Negative space is an artsy term meaning the shapes formed by the background of a piece, rather than the subject matter of the piece itself. It can be used in visual illusions but I remember learning about it in a life drawing class, being told to pay attention to negative space to ensure proportions and perspective are realistic. Wynter asked Indio about the concept (in book 4) when he was painting baffles for their rehearsal studio:


“I’m very happy with these,” she said after a while. “At first I kept looking at the shapes of the galaxies, but the parts in between make interesting shapes and curves, too. Did you do that on purpose?”
He exhaled, washed his brush, mixed up a new color. “It’s partly subconscious, I think. It’s called negative space.”
“It holds everything else in place, doesn’t it? Sort of pushes the other parts into shape.”

And Indio at age 15 drew a picture with the same theme (referred to in book 3 - one of the confiscated sketches):


“This is my favorite,” she said at last, as they pulled up in front of the house. She moved to the top of the pile the picture of a child cowering under an onslaught of formless shapes. “Is he six years old?”
“Six, seven, eight… The years I thought she was coming back.”
“This is me, then, at ten or eleven. I don’t remember when I stopped hoping. I guess it was a gradual thing. I didn’t exist for anyone else in that place, and eventually I didn’t exist for her, either. These shapes—” Her fingers traced the forms. “—they surrounded me, choked me, in the spaces she was supposed to be.” She gave him a weak smile. “I never thought of it this way before. Never imagined what it looked like. This is exactly what it felt like.”

To me, this was a useful way of looking at Indio's misdirected emotions. He was pretty much raw and reactive in his teens, and unfinished as a young adult, but at least he has self-reflection on his side and in the later books he does mature a lot.