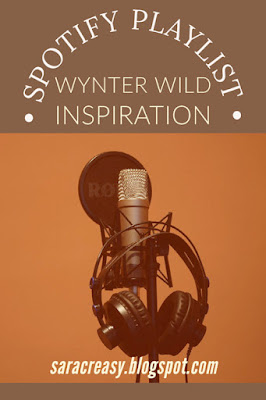 Little Sister Song on Wattpad has just hit 150,000 reads since I started publishing it in December 2018 - beyond my wildest expectations! I'll be posting a few blogs to celebrate.
I don't often listen to music while writing (especially not songs with lyrics) but when I'm plotting, or playing out scenes in my head searching for ideas, I have some favorite songs I keep going back to. These songs don't necessarily reflect how I imagine my fictional musical family would sound, but for various reasons the music inspired me.
Follow me on Spotify to find more playlists for the Wynter Wild books:

So, why these songs? A few notes...
Rule212 inspirations
I haven't found the "perfect" song for this band but the following either sound a bit like them (not the singers necessarily, but the feel and beat) or lyrically remind me of something going on in their lives:
Wynter's songs
Indio's songs
Jesse's Songs
Caleb's songs
Wynter & Indio
I will add to the list if I find more songs.
I've shared other playlists here:
Little Sister Song ebook is available here or from your local Amazon store, Barnes & Noble and other online retailers. The first four books are also available in paperback. If you've enjoyed the series, please consider leaving an honest review at Goodreads (for any or all of the books you've read so far). Reviews are the best way you can help indie authors.