Wynter Wild is a Sim!

Lego houses are my first love, but my second love is Sims houses! I used to satisfy my house-building fetish with the Sims years ago because all my childhood Lego was at my parents' place. Recently I purchased The Sims 3, which I was told is more versatile for building than the latest Sims 4, and built the house on Tiger Mountain. 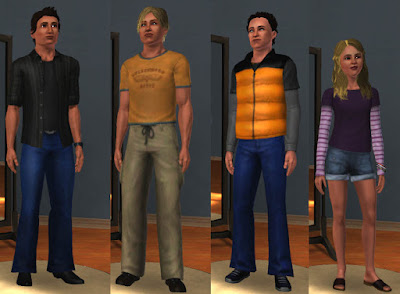 I created them with personalities and approximate appearances to match the books, and if you use Sims 3 you can download the household from the Exchange and use them in your own game.

Note that Jesse's curly hair is a custom download.

I also downloaded lots of custom content for the house because I don't have any Expansions and needed things like medieval furniture (for the tower), a drum kit, and some cute knick-knacks to scatter around. Most of the custom stuff comes from modthesims.

Having a non-functional sense of aesthetics when it comes to house decor, I did the best I could... I'm especially bad at the exterior of the house and gardens. So this is really just to give you an idea of the size and interior plans. You might want to look at these shots in conjunction with the house plans I drew up. (This Sims house and that one aren't identical because of the limitations of the game.) Note that the named rooms of the house plan relate to the layout when they first moved in. Later, Caleb and Wynter swapped bedrooms so she got the master, and Jesse moved into the tower.

So, the Tiger Mountain home is at the end of a winding mountain road. There wasn't one of those in the Sims town so you'll have to pretend there are trees everywhere and that the street goes up to the gate. Here's the view over the wall, with the new garage on the far right and the main farmhouse on the left. The driveway from the gate to the garage is much longer than this in "real life" but I was limited by the small size of the lot. For the same reason, the backyard is truncated - no room for the goats, but I did include the features closer to the house. Behind the tower you can see the gazebo out the back inside the stone-walled garden. 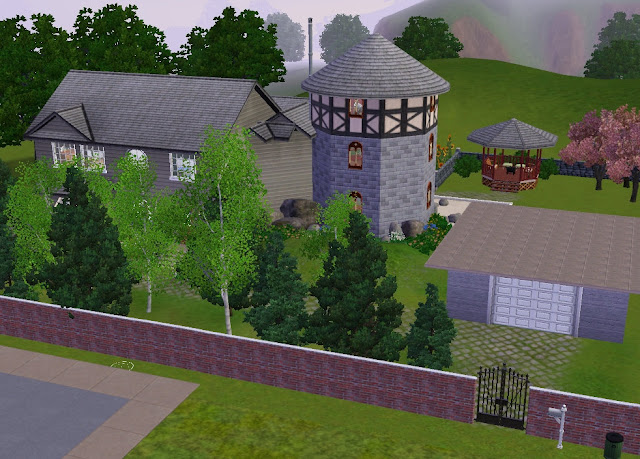 At the front door. The Sims does weird things with the roof when the building shape is irregular, as you can see on the right - that's the angled hallway leading into the tower, which makes more sense in the later shots below. 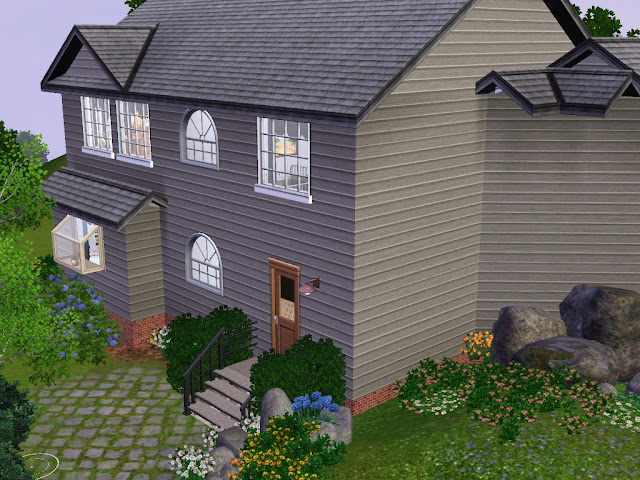 Let's go inside and we'll look at the back garden later. This is the view as you enter - doorway to kitchen on the left, living room straight ahead with (out-of-view) door to the tower on the right, and the French window to the deck straight ahead. (Note that I removed walls to take some shots.) 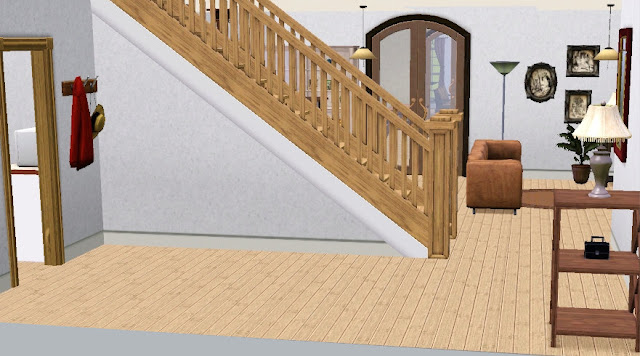 Here's the kitchen looking back into the entry hall, front (bay) window on the right, breakfast bar (or island bench), and behind it on the left the archway to the dining room. (The near wall, which is the left wall of the house, is removed). 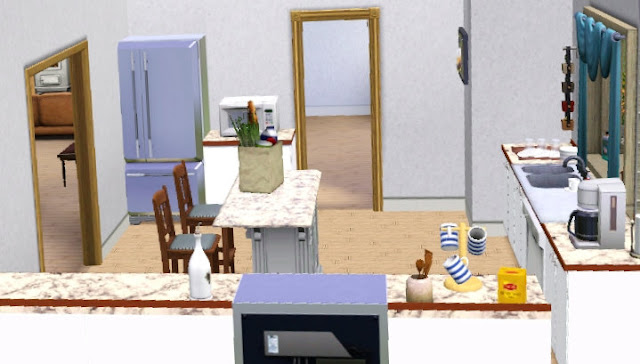 Aerial shot of the kitchen: 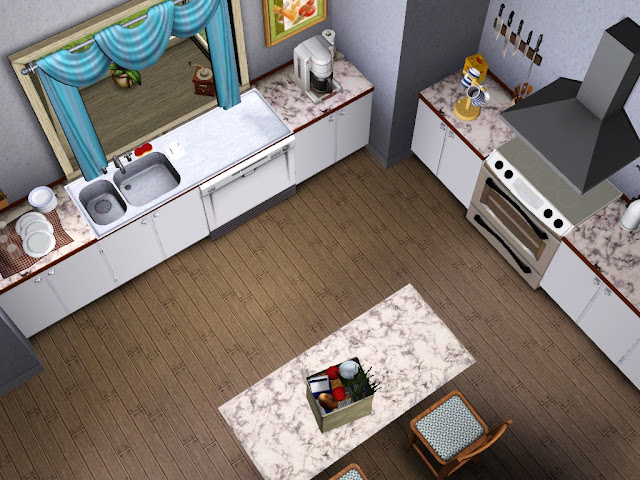 This view is from the living room looking through to the dining room (and kitchen at back left). That's Harry's piano! And on the right wall you can just see the French window going onto the deck. 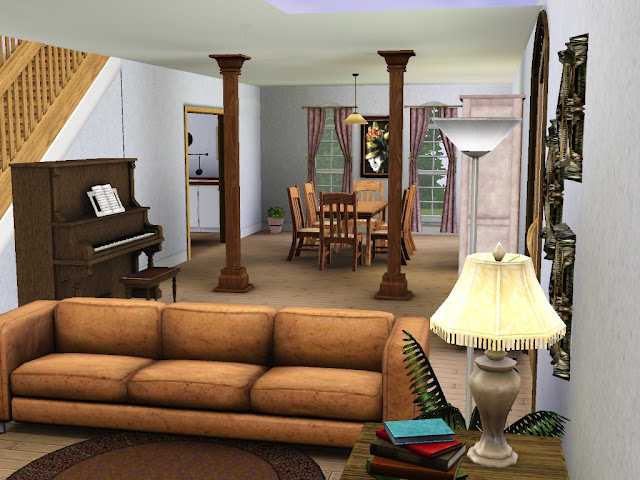 A view of the living room from the front door looking into the house. The door in the middle leads to the tower. The French window is on the far left. This odd-shaped room isn't used much because they have a more comfortable family room out the back. 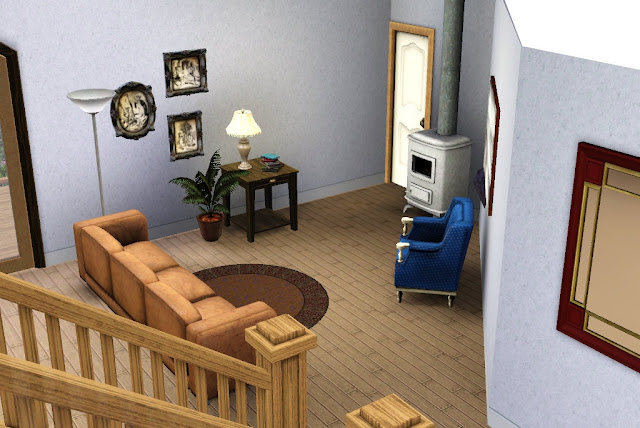 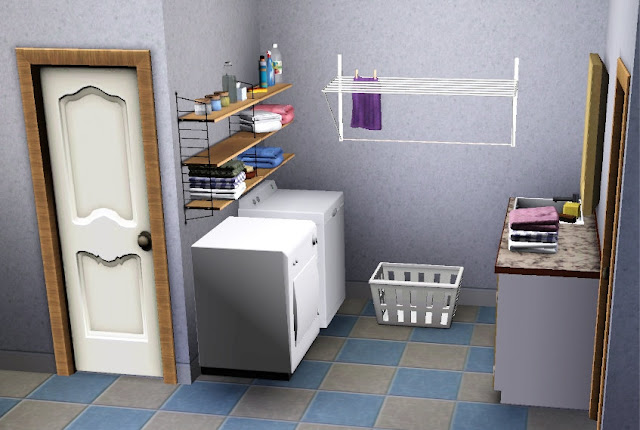 The next room is Indio's studio, which turned out about half the size I planned. The house is so long that I ran out of room on the lot! His drafting table is at the bottom of the pic beside the door. 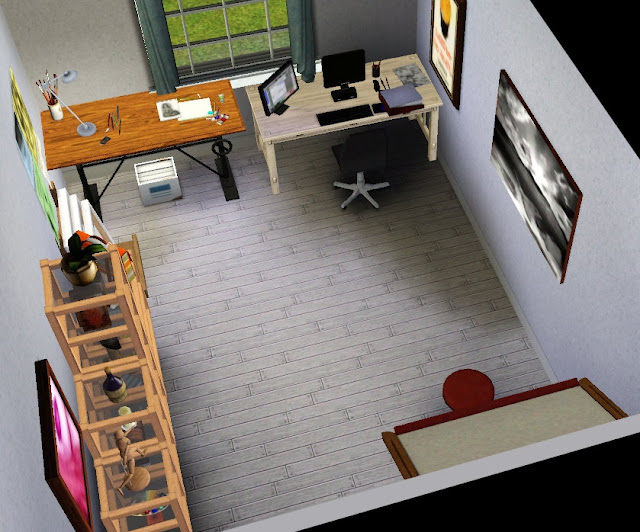 Between this room and Indio's bedroom is the guest bathroom that he renovated to earn his keep when he moved in. The odd shape is because of the built-in-closet in the bedroom on the right. 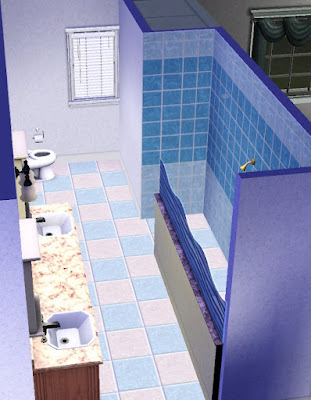 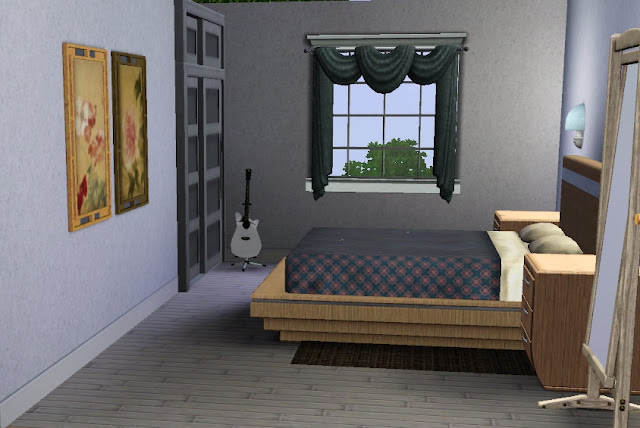 To the right of this room are the stairs leading into the basement. Opposite his room is the family room, entered through the door on the right in the picture below. The French window at the back leads to the deck, and beyond that is the similar door from the living room. Entertainment is provided by the foosball table and pinball machine, in addition to the TV, crackling fire, and one of several random guitars distributed through the house.

Let's take a quick look into the basement. The first thing you see after rounding the stairs is the control room overlooking the live room. To the left in this picture is the vocal booth for isolating recordings. On the far right is the half wall overlooking the den. 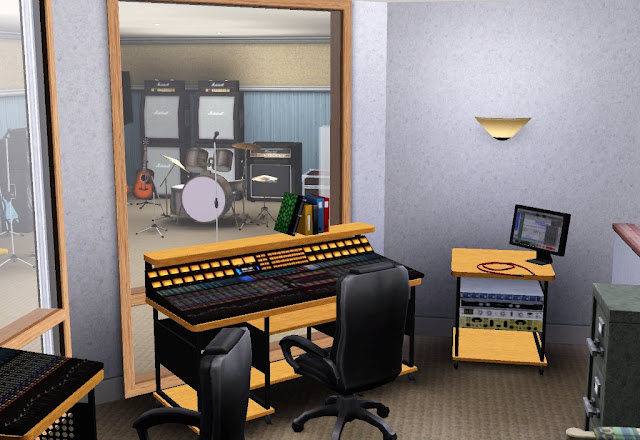 Here's the live room (for recording and rehearsals). Imagine those blue walls are actually Indio's paintings, which serve as baffles and decoration. 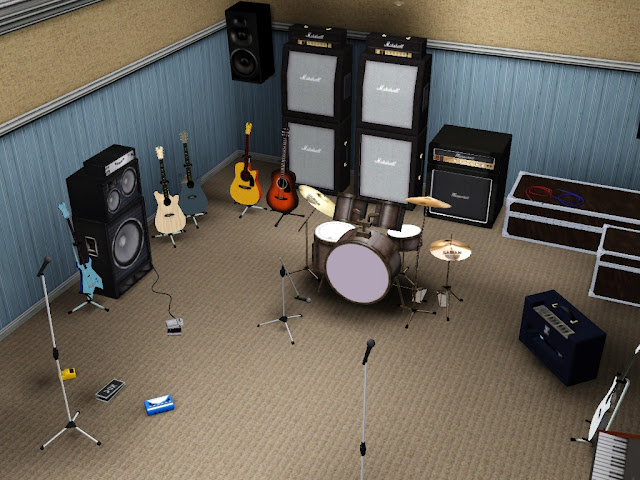 Behind the control room, over the half wall, is the den - including kitchenette and bathroom right at the back: 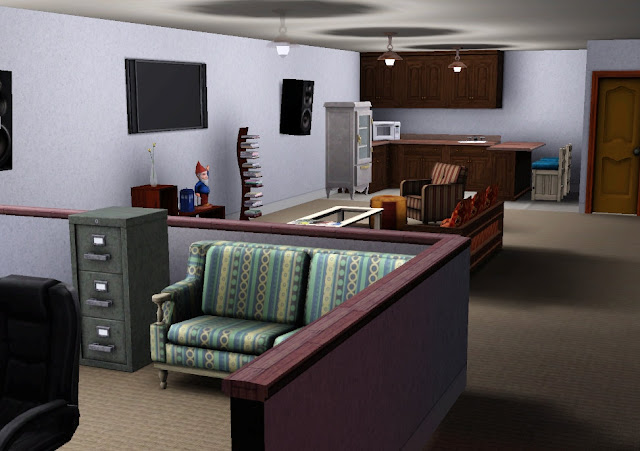 Here's the layout of the basement to orientate yourself: 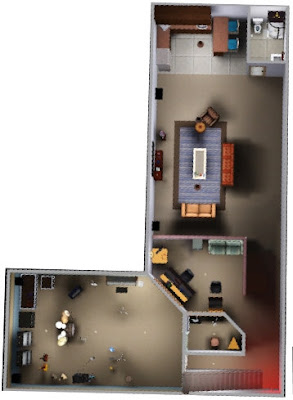 Up the main stairs, here's Wynter's room. Because I couldn't do L-shaped stairs, the plan of this second floor isn't correct - that's why her room is an odd shape. At the back left is a walk-in closet (shown with a dark gray ceiling here) and the door to her bathroom. 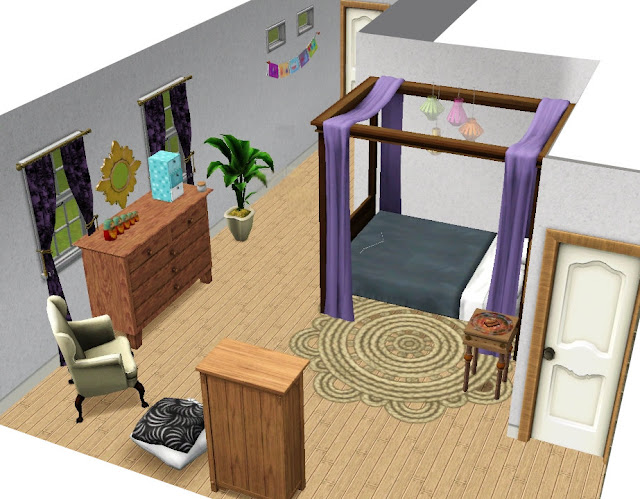 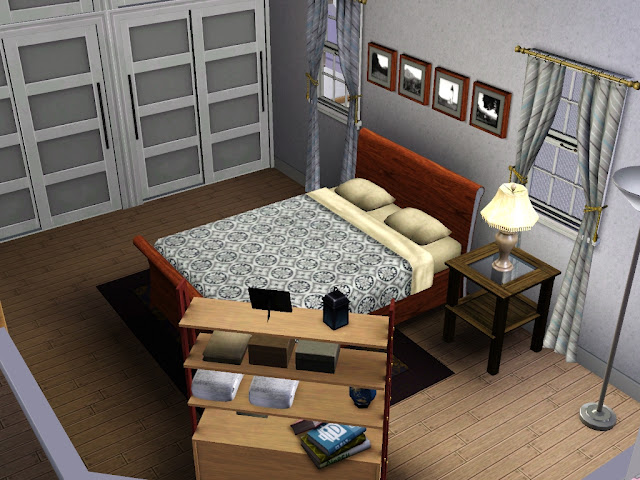 And the small third bedroom, which for some reason is set up as a nursery (front and left walls removed): 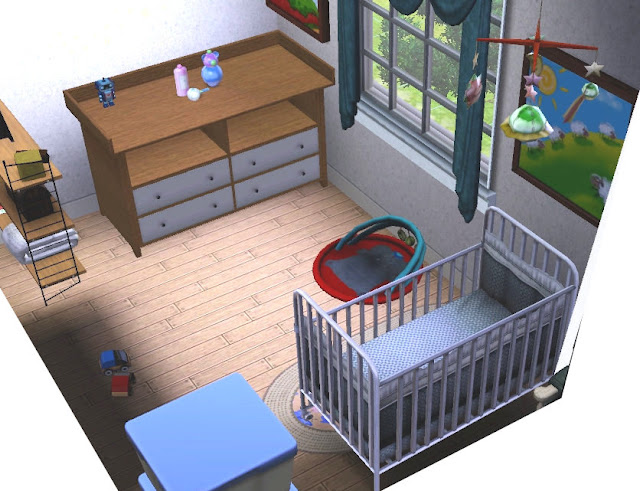 The three floors of the octagonal tower are next. From the bottom up, here's the study with some walls removed to see inside - Wynter's desk on the right, Jesse's at the front (actually overlooking the back garden), Caleb's at the back right. The door to the main house is on the right. 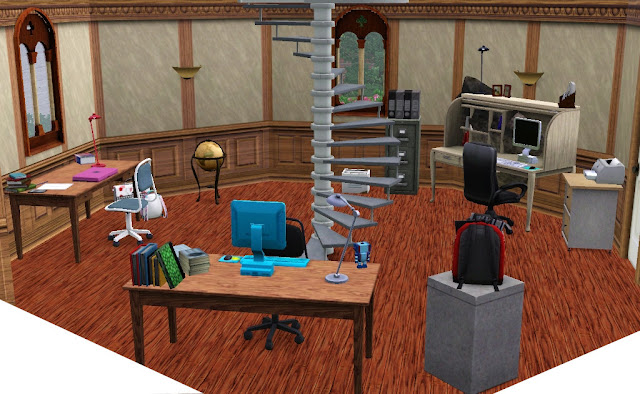 The second story is the gaming room, including pool table, bar (at the back), chess table (and big bookcase out of shot), and the altar-table at the front for family boardgames. 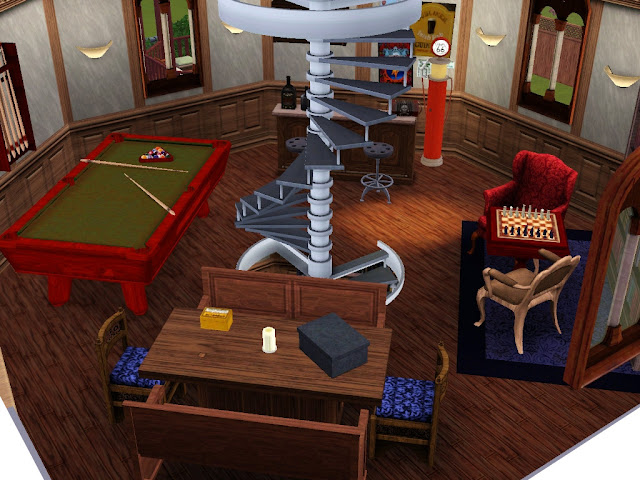 At the top of the tower is Jesse's medieval bedroom, complete with telescope and Dusk's Wiccan altar. Just out of view are the church lectern and kneeling stool, along with a room divider that may one day make way for the confessional box of Jesse's dreams. 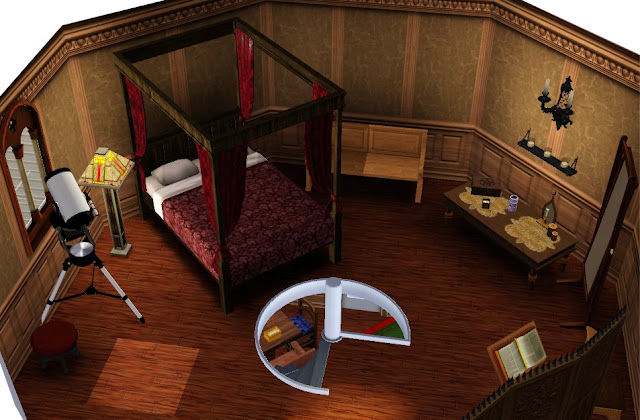 Finally, the backyard. Here are the parts close to the house, which is all I had room to build. You can see the deck, the tower base, the Zen garden, and the gazebo. The vegetable gardens are hidden by a row of sunflowers - see the next shot. 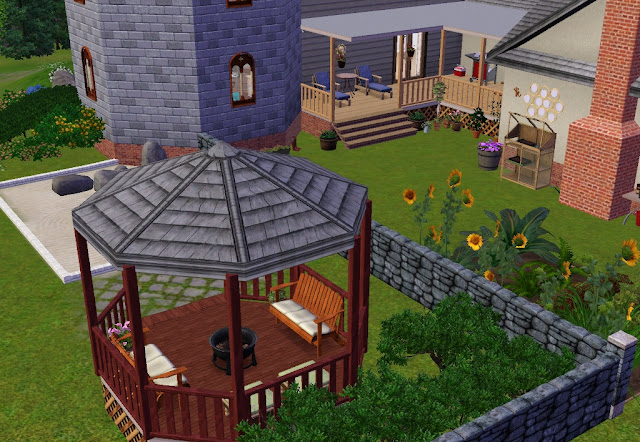 A lower-angle shot from further to the right to show the veggie garden, compost, hay for the goats, and Wynter's gardening station on the far right (against the family room wall). The stone wall has a gap in it where the stone arch is meant to go (I couldn't find a suitable one to place here). If the camera were to pull out and pan even further right, that's where the goat pen would be. 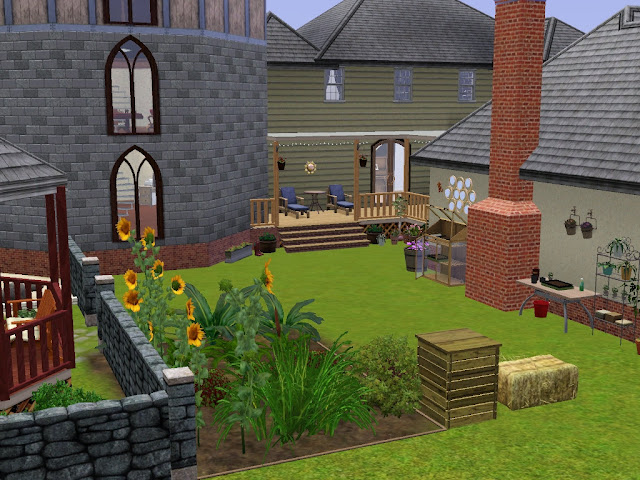 And a fully zoomed out shot to show the orchard (bottom left) where the hammock goes. The wooden fence is the property line - but this entire walled-off garden is supposed to be bigger, so the orchard should be larger and further away from the house. Where you're sitting looking at this view, if you stepped back a few dozen yards, you'd be in the far fields or the forest itself. 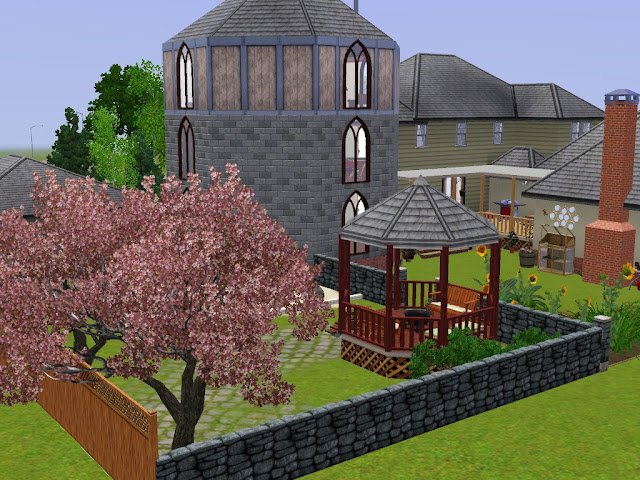 Close-up as you approach the deck: 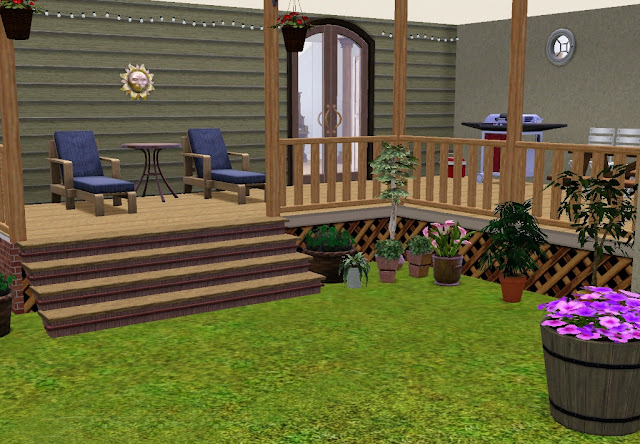 And one last shot before we leave - this is the view as you're relaxing on the deck. (I removed the living room wall and pulled the grill forward to get it in shot - behind it is the picnic bench.) In the misty background is the forest and mountains. 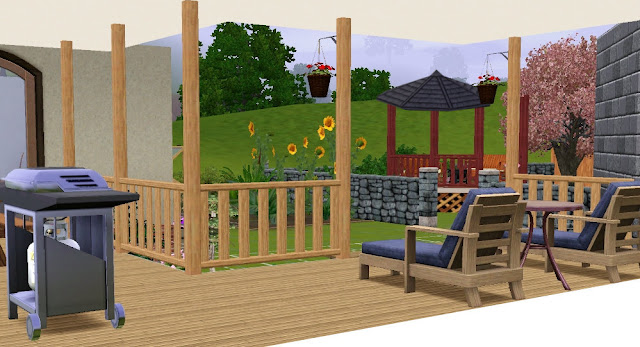 Despite the limitations of the Sims program, I hope this gives you a feeling for Wynter's beloved home on Tiger Mountain. For more, see:
> Caleb's House in Seattle & Caravan (Sims 3)