The Wattys Pre-emptively Screwed Themselves (Again) 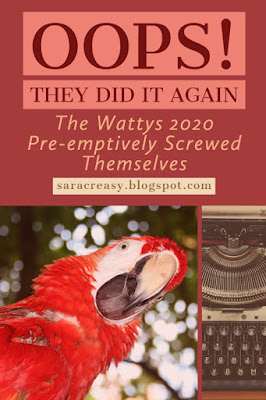 The Wattys 2020 awards were announced last week, with the book of rules and guidelines going up on Wattpad.

After the 2019 awards I was vocal about two major problems (as I saw them): that previously published authors won two awards (I wrote about this and the outcomes here), and the rules book was misleading, contradictory, repetitive, and dense, with valid questions from Wattpadders seeking clarification going unanswered by Wattpad staff.

This year the Wattys have changed in two major ways, one of which makes business sense and the other is just common sense:

1. Only novels 50K are eligible (no non-fiction, poetry, graphic novels, novellas, short stories) - Given Wattpad is looking to publish the winner(s), they won't make money from anything shorter than a novel. To recognize these other types of writing, they will have other contests later in the year.

2. Only finished stories are eligible. Last year, one of the judging criterion was (obviously) plot - does it have a beginning, middle, and satisfying end? It befuddled me at the time how this was supposed to be judged when the story was unfinished.

But I have gripes.
Note before we proceed: I have no eligible stories to enter in the Wattys. I'm just disheartened and kind of stunned that a platform I enjoy using and would love to encourage others to use seems to have learned nothing from last year's fiasco.

The rule book is essentially repeated from last year (with the above changes) - with no attempt whatsoever to clarify all those issues Wattpadders queried last time. The 2019 rules were a mess, and the 2020 rules show all the same mistakes (including grammatical, which is worrying given this is a writing contest and we need to trust the judges understand language).

The most obvious problem comes from formatting the rules as a Wattpad "story", in chapters. When all the rules don't appear on the same page, you get people asking questions before they reach the end. You get unqualified people answering those questions, resulting in incorrect information being distributed. This isn't helped by the apparent reluctance of Wattpad to staff to intervene with correct information.

Another unwanted effect of having multiple chapters of rules is that there is copious repetition. In fiction we're advised to say something three times to make sure it sticks. Guess what? In contest rules this is a bad idea. Say it once. Say it concisely and correctly, and define your terms. Anything else just adds to the confusion. People will scroll past something that looks like repeated information, thereby missing the one sentence that was actually new and important.

Finally, don't put previously unmentioned rules in the FAQ! The FAQ isn't the place to add new information relating to the contest requirements. If the rules are clear, nobody should need to read the FAQ because there would be no questions. If the rules aren't clear, make them clear. The FAQ is the place to put things like justifications for the rule changes (which it does), not eligibility requirements relating to exclusivity or sequels.

It's my observation that many writers who use the platform, especially those who complete their stories (required for 2020 eligibility) are hoping to publish. It's free and easy to stick your Wattpad story into a Word doc and upload it to Amazon, i.e. self-publish. Doing this makes your story ineligible to enter the Wattys (unless... well, see below). Yet the Eligibility requirements make no mention of published works being ineligible.

The issue of exclusivity isn't addressed until the What to Submit chapter of the rules: "Your story cannot be published either traditionally or through self-publishing (Patreon does not count)."

Patreon being excluded as "publishing" isn't explained and I won't speculate why Patreon is allowed when it's fundamentally the same as a blog, but the nitty-gritty of what is actually allowed in terms of uploading elsewhere on the web isn't mentioned until the FAQ chapter, which contradicts the What to Submit chapter. This is remarkable (I don't mean that nicely) because many writers upload to multiple platforms. They need to know up front what will disqualify them. 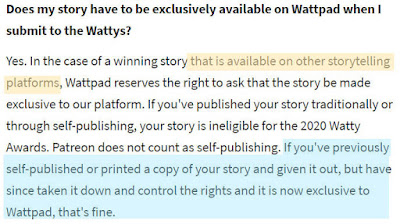 The question asks about entering the Wattys but the answer starts with winning the Wattys. Imprecision like this is massively confusing to people trying to figure out the rules (and this isn't even a rule - it's in the FAQ!). Implicit in my yellow highlighted phrase above is that it's okay if your story is on other storytelling platforms when you enter - so "Yes" means "No". (You may have to remove it if you win, but the question was about submitting it.)

The blue highlighted part says it's okay to have self-published the story as long as you unpublish before entering, a contradiction of the What to Submit rule that says it cannot be published.

Wattpad would do well to define their terms (again, up front) because they've made an arbitrary distinction between publishing platforms (like Amazon) and storytelling platforms (like Inkitt), with Patreon having an unexplained special exemption - while trying very hard not to explicitly state any of this.

Here's my interpretation of the exclusivity rule for eligibility (drawing from other parts of the rule book as well):

There's this doozy in Legal Stuff:

This is clearly nonsense. Wattpad can demand what they like as a condition of winning, but here they're saying if you even submit your story you have to keep it up for six months after the end date. What's the point of having a totally unenforceable (and ridiculous and unethical) rule? Wattpad makes it clear they don't own any rights to your story. Of course they can't ask you to keep your story on their site simply because you entered their contest. Why does this matter? Because as long as your story is on Wattpad, you won't be able to self-publish to Kindle Unlimited (which requires exclusivity).

~~~~~~~~~~
Update: I started a forum discussion about this point because I believe it unfairly restricts losing entries. The issue of whether the agreement is enforceable was debated, along with the (frankly, silly) notion that because Wattpad would never enforce it anyway, questioning it is a big fuss about nothing.

A Wattpad staffer weighed in today (21-22 Feb) "to address the overall concern" by (curiously) calling it a "6 months exclusive period" and saying the following: "at the end of the day, yes, it's the winners we care about, and yes it's difficult to enforce."

I asked if Wattpad ever intended to enforce it. I have zero faith in getting a reply. The reason this issue isn't "nothing", the reason Wattpad put the clause in the Legal Stuff section, is to make a lay person believe they can and might enforce it, thereby (they hope) making you comply.

Wattpad, just ask losing entrants to "please leave the losing stories up if you want to be considered for further opportunities."
~~~~~~~~~~

The What to Submit section also includes this weird one:

I would logically parse this as: The entire story needs to be on Wattpad; and the story needs to be exclusive to Wattpad; and you can't put excerpts of your story anywhere else. This isn't what the statement is actually trying to say (and of course it would be ludicrous to not allow writers to put snippets of their story on their blogs or social media). Nick, the Director of Wattpad Content, clarified in a comment that the "excerpt" refers to the first part of the sentence (stories must be "full" or complete) - in other words, yet more unnecessary repetition. The rules already state (in several places) that the story has to be complete.

Wattpad, get yourself a clear-thinking editor who understands language!