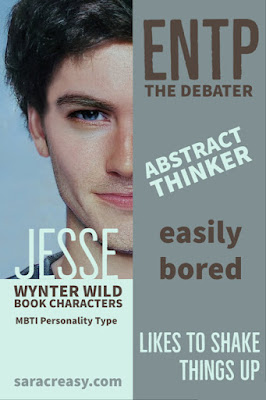 This will be the first in a series looking at the personality types of the characters in the Wynter Wild series, comparing them to each other, and discussing character pairings - meaning how they interact with each other (in both positive and negative ways). I'll focus mostly on the siblings (Caleb, Indio, Jesse, Xay, Wynter), using their MBTI (Myers-Briggs) personality types.

I did personality tests on my characters about one year into writing, when they already pretty well established in my head and on the page. I thought it would be interesting to see how closely they matched the established "types", and also knew it would generate some ideas for how they deal with stress, and with each other (particularly what causes conflict).

I became interested in this method of personality typing a couple of decades ago. 16Personalities is a useful summary site to familiarize yourself with the 16 types and take the test yourself if you want. (Not all sites use the same "shorthand" descriptor, e.g. "debater" for ENTP, but the idea is the same.) It's up to you whether you find this psychological approach useful for real people, but as a writer I do find it useful for character generation - or, in this case, for delving deeper into characters I'd already created.

I'm writing these posts in the midst of editing (and uploading to Wattpad) book 8, so there may be minor spoilers if you haven't read that far. Read about:

Jesse's personality type is ENTP - the "debater". Let's break it down:
A quick look at which of these traits he has in common with his siblings: Firstly, he and Xay are the only Extraverts among the five. Caleb, Indio, and Wynter prefer to energize themselves with alone-time, and find crowds of people to be quickly draining. You won't find them hanging around for long at a rave.

He shares the iNtuitive trait with Indio - they both are abstract thinkers, interested in possibilities and philosophy and hidden meanings. Jesse is a rational intuitive, while Indio is an idealistic intuitive. They enjoy deep & meaningfuls, although they approach them differently.

He shares the Thinking trait with Caleb. These two are less likely to consider your feelings when making decisions. They weigh the odds logically to calculate the best outcome, sometimes forgetting to allow for the human factor.

He shares the Perceiving trait with Wynter and Xay. All three have trouble making final decisions, or they second-guess themselves after making a decision in case it's the wrong one. They want to understand and adapt to the world, rather than organize it. (I'll deal with Wynter's apparent obsession with rules and lists when I write about her, but suffice to say her unusual background has put her in a survival frame of mind for the first couple of years on the outside.)

Put all this together, and you have a guy who loves an argument for argument's sake. Jesse likes to shake things up and push them in a new direction, often with ideas that have no basis in reality. He brainstorms and thinks big, then sits back to let someone else do the drudgery of implementing his ideas because he's easily bored and can't be bothered to follow through (perhaps not the best characteristic for an engineer). While he needs constant contact with the outside world in order to generate ideas, this also means he's easily distracted.

He's unrelentingly honest, without too much concern for causing hurt - he can be inappropriate and offensive. His logical arguing style comes across as argumentative, pressing beyond others' tolerance, and he doesn't consider emotional points to be valid in debate. For this reason he finds Caleb pretty easy - or efficient - to live with. He loves learning something new just because it's fascinating, and easily connects disparate ideas in novel ways. He will dump tradition in order to create something new and better. He's a polymath, with the charm and the way with words to convince others to join his hare-brained schemes.

When in a romantic relationship, this type loves to push boundaries and challenge traditions, and Jesse is not afraid to do this - unfortunately, he's yet to find a girl who'll put up with it for long. He's obsessed with self-improvement and gets bored with the status quo. His ideal partner should share his iNtuitive trait, with some opposing traits to create balance and opportunities for growth.

Dusk is ENFP, which has only the Thinking/Feeling trait different from Jesse. This means Jesse dislikes any time she's not straightforward and honest with him, while she would like a bit more deep personal conversation than he's comfortable with. She is sensitive to him being critical of her - but Dusk has a lot of critical people around her, and has grown used to it without taking offense. It's harder to take from the guy who claims to love you, however.

Indio is actually a near-perfect partner for Jesse, which is perhaps why they get along so well despite being so different, because they have iNtuition in common with everything else opposite.

> Read about Wynter's personality type next.

From themyersbriggs.com here are some fun illustrations for Jesse's ENTP personality, from his shoe type, food and drink, to his perfect Valentine's date: 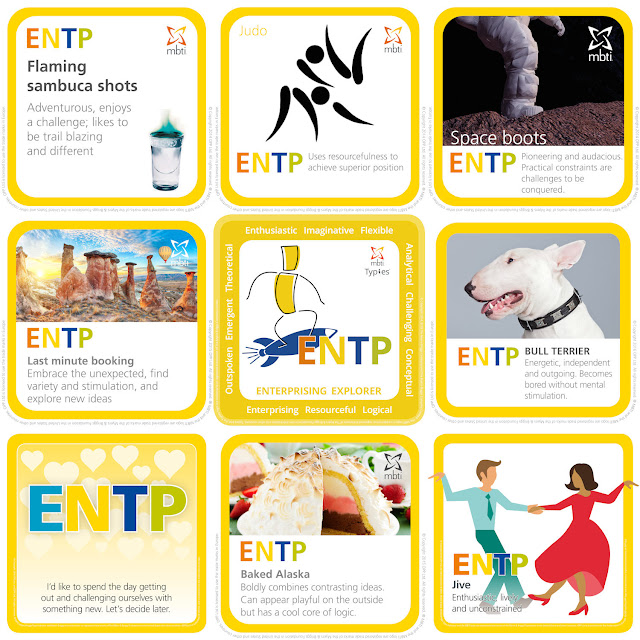