One Night Vacation - How Many Tiny Things Can Go Wrong?

Since my daughter is on school vacation, we decided to spend a couple of days, along with my mum, on the coast where my sister has a caravan. There were already six in the caravan, so we stayed the night in a nearby motel. MCP was home alone, fending for himself, because I didn't have time to restock the fridge before I left. He appears to have survived on hash browns and bacon.

How many little challenges can we fit into one 36-hour period?

First was a half-hour traffic jam on the freeway offramp, due to roadworks at the roundabout. Added 50% to our travel time. And I wasn't even supposed to go that way. I followed the GPS instead of my usual route, which would've taken me off that freeway earlier.

As soon as we arrived at the campsite, I parked in the usual place - a grassy area off the dirt road. Sister comes out waving her hands - "Don't park there! The ground's mushy." I was indeed bogged down. All the kids were roused to help push me out, leaving these deep tracks in the ditch - and a filthy car. 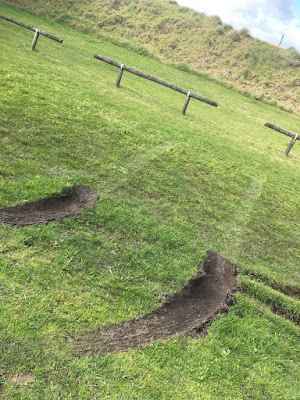 Next up - I couldn't find (and still can't find) the new card game I brought along to try out with the family. I'm 99% sure I packed it but it's gone. Don't you just love spending $25 on something and losing it before you've even opened the shrink wrap? We made do with Carcassonne and Canasta.

My allergies were hellish while I was at the beach, despite the alleged "fresh ocean air". When my allergies act up, I get exhausted. So I napped both on the second afternoon and again the next day after we got home. I did get some writing done. The entire site lost power on the second afternoon, which as you can imagine is a major disaster when five kids need to recharge their devices.

As we left the campsite, I backed into my sister's car. Yay. (No damage to her car, and ours is so beaten up I can't tell if I added a new dent or not.)

Bonus beach pics! Despite the little annoyances, it was a lovely couple of days away from home. Sophie and her cousin played in the sand and collected rocks... 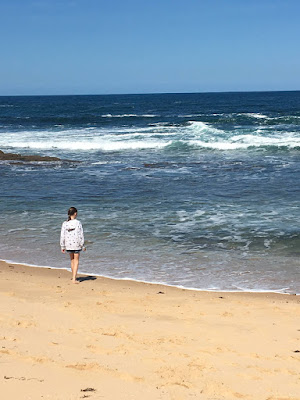 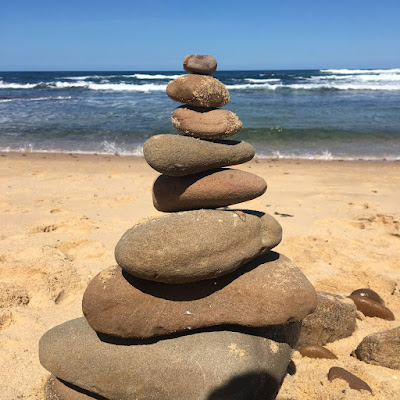 The last thing anyone would ever call me is a beach babe. I'm not a fan of sun, surf, or sand. But I did take a selfie to prove I was there. Note the fur-trimmed vest - it was very sunny, but fairly cold and windy. 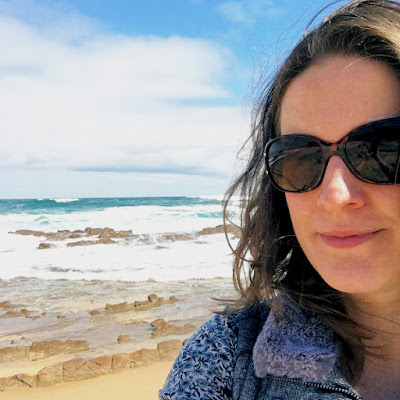 This is the boardwalk down to the beach - such a typical Aussie scene: 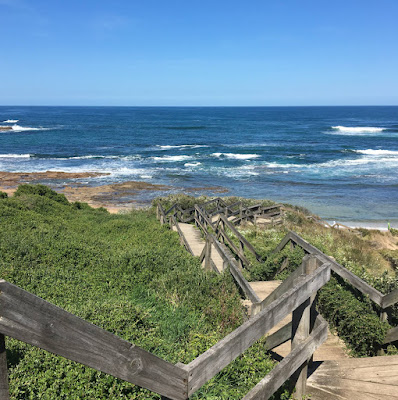 Sunrays breaking through clouds is my favourite "sky": 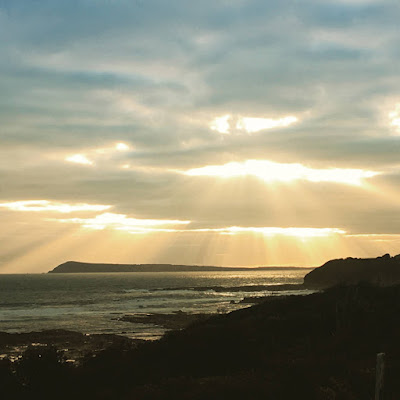 Back home, both cats were skittish for 24 hours because their precious routine was upset. While we were gone, Indy vanished outside until midnight, while Crystal got under the covers to cuddle with MCP, which she normally only does on my side of the bed.

The fish didn't get fed.