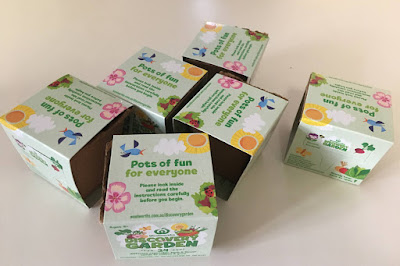 My least favorite pastime is killing plants. Unfortunately, I keep doing it.

Unlike my main character Wynter, every plant left in my care suffers a quick (hopefully painless) death. So when I discovered one of our major supermarket chains is giving away a free seed kit with every $30 spent (aimed at kids, like all similar promos - last month it was Lion King Ooshies), I was probably less thrilled than many parents. Not because it isn’t fun and easy to sprout seeds with your kids (it is!), but because I know damn well those seedlings are going to keel over and die as soon as I repot them and attempt to turn them into useful veggies, herbs, and flowers.

Experience has taught me how bad I am at this. A friend gave me rhubarb in a large pot a few years ago. It sat on my back patio refusing to either die or grow to a sufficiently useful size that I could harvest anything (I love rhubarb, by the way). When we moved to our own home I replanted all three paltry stalks of it in the garden. It still refused to die, which baffled me, and it even occasionally grew new leaves. Every few weeks when I checked on it, most of its leaves had been eaten by snails. I’d sprinkle snail pellets and let it be for a while. A few weeks later, same again - all the new leaves bored through with snails, still no stalks to harvest. Throw down more snail pellets. Rinse and repeat.


A couple of years ago my green-thumbed sister finally took pity on it, and dug it up for her own garden. Where, of course, it thrived, and I’ve baked several dishes of rhubarb crumble since.

Here are our beautiful sprouting supermarket seedlings about 2 weeks after "planting". Planting means wetting the soil disc to expand it, then adding the piece of paper impregnated with seeds. (We didn't realize what these bits of paper were at first, and threw them out thinking the seeds were already in the soil disc.) We have lettuce, beet, pansy, coriander, and heaps more. 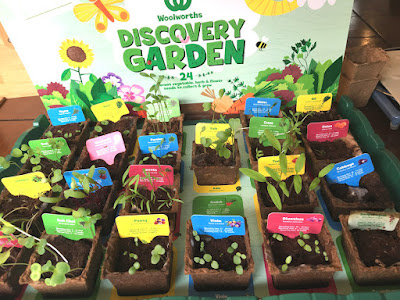 Prepare to die, little ones.

And now for my great success story. When we removed the twee cherub fountain from our front yard and replaced it with a small lavender plant, I wasn't hopeful. But that thing exploded, despite zero care from me. It killed off the three seedlings (spiraea or similar) I planted around it and for two years it has bloomed outrageously. Even though I never cut it back before winter like you’re supposed to. It bloomed last week just in time for spring and the bees are already finding it. 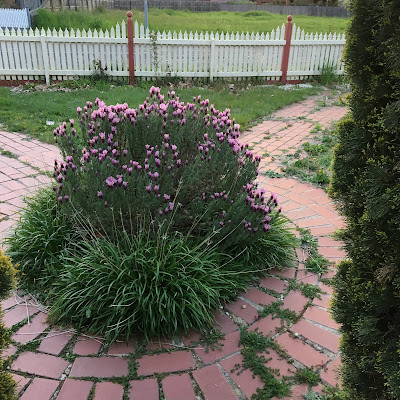 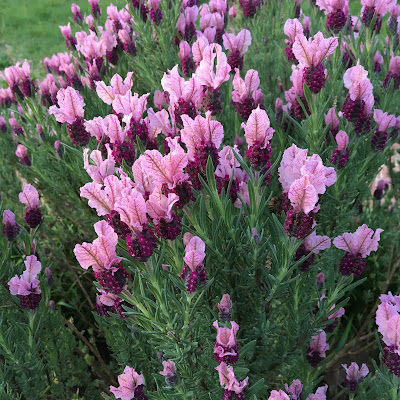 It's Spanish lavender, with cute bunny ears atop each stalk. (And I see my pathway needs weeding. You don't notice these things when you're no good at gardening.)

Our blossom tree blossomed at the same time. Don’t ask what kind of tree this is - I’ve no idea as it doesn’t seem to produce fruit - but these trees are quite common in our neighborhood. We have the biggest and the best in our street. 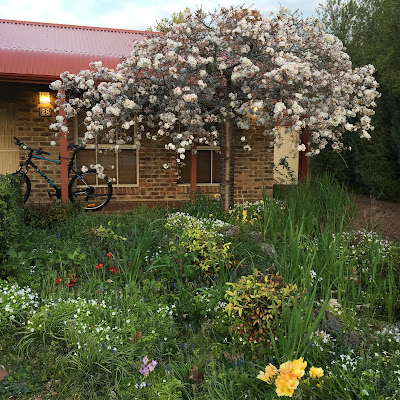 See my overgrown garden? That was a perfectly manicured wood-chip flower bed with a few pansies and rose bushes when we moved in five years ago. It went crazy. Random flowers keep popping up - I don't know how or why. And we removed the roses because they had lethal thorns, and because I'm not a fan of large-petaled flowers that only look good for one week and then look bedraggled and rotten.

What's your greatest gardening success or failure? I'm not ashamed to admit my other greatest success is the tiny fake succulent on my bathroom shelf.