Breaking the Rules: What the What with the Wattys? 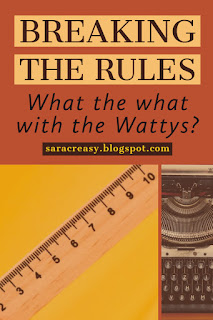 The other day I checked out the 2019 Wattys winners, looking for books to add to my reading list, and to get an idea of the kind of stories that win.

I started uploading my Wynter Wild series to Wattpad in December 2018, which in theory made the first few books eligible for the 2019 Wattys. I'd never heard of the Wattys until I joined Wattpad, but of course I considered entering Little Sister Song, come June, for the chance to become one of the ~60 winners. An award is great exposure for any writer using this platform where there are 500 million stories fighting for attention.

When I read the rules and found that published works were ineligible, I had to put that idea aside. (At the time, the later books in the series that weren't yet published were eligible, but I saw no point in entering book 5 or 6 of a long series, as it's necessary to read them in order.)

But back to those Wattys winners: On a hunch, I searched for one of the stories on Amazon and discovered it was self-published earlier this year (same title, author, and cover). I checked the other winners and found a second winning story on Amazon.

This blog post is partly a bitchfest about why ineligible stories won the award when I (and no doubt many others) specifically gave up our chance and did not enter because of the exclusivity rule. Yes, the chances of winning are miniscule—for example, your story has to impress a "Story DNA" computer algorithm before a human even lays eyes on it—but that's not the point. And it's partly a piece of advice to Wattpad to get their house in order and be more professional about their contest, to avoid this problem reoccuring.


Disclaimers:
1. The published stories referenced above were from categories unrelated to my books.
2. I queried Wattpad via a support ticket to ask how a published work could win a Wattys award. The response was that "they" would do "a full investigation".
3. I sincerely hope the company addresses this error without stripping the winners of their awards. The fault is entirely with the Wattys and their confusing, contradictory, repetitive, badly edited, and apparently unenforceable rules.

UPDATE: As of 19 October, one of the two published books has now been removed from Amazon (the Kindle has disappeared, the paperback is listed as Out of Print).

So, what are the rules? The official book (called a "story" on Wattpad), The 2019 Wattys Awards, outlines the rules and other information. They're written in a super friendly and fun way, to their detriment. Chapter 2, Eligibility, makes no mention of published stories being ineligible. I don't know how Wattpad managed to be so out-of-touch with its writers that it doesn't understand many of us use Wattpad as a sounding board, with the intention of self-publishing anything that becomes popular. Whether published works are eligible is the #1 question for these writers, or, if they don't think of asking the question, should be the #1 answer.

I have no problem with published works being ineligible, and I fully understand why it's important to Wattpad for this to be the case. My concern is that they buried this requirement and addressed it in a confusing manner, and now they're stuck with the horrible situation of having awarded Wattys to ineligible books.

The fourth chapter, What To Submit, includes this in the first paragraph: 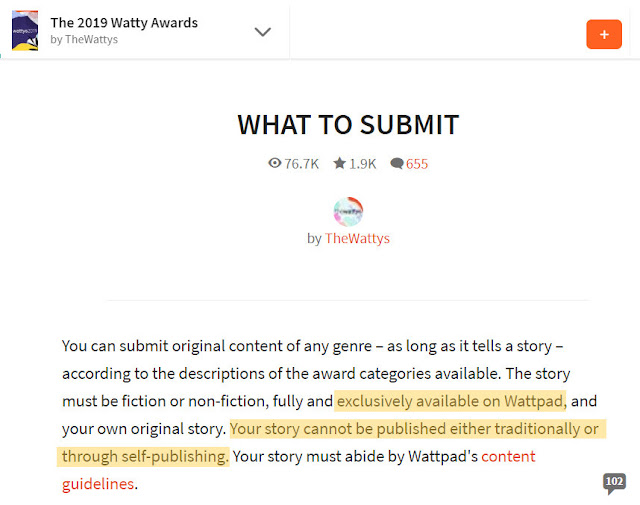 Despite the phrase "must be... exclusively available", the FAQ (chapter 15) contradicts this by saying stories available on other "storytelling platforms" are eligible, but that Wattpad "reserves the right" to "ask" (but not demand?) that winning stories be taken down from those platforms. This is a dealbreaker for some writers—but, again, understandable from Wattpad's perspective.

(Note: They also require winning stories to remain on Wattpad for six months, which means if you self-publish a winning story, you can't enroll it in Kindle Unlimited, as KU requires exclusivity.)

The second highlighted phrase above is confusing (judging from the questions in the comments) thanks to an awkward use of tense. In combination with the FAQ below, however, it's clear that previously published books are not eligible:

(This FAQ about exclusivity is "NEW", but I can't find rules from earlier years to see exactly how it has changed.)

Wattpad makes an arbitrary distinction between writing on a storytelling platform, like Wattpad or Inkitt, and being "published" (meaning in book or ebook form, traditionally or self). The comments from users regarding these paragraphs show how incredibly confused (or misinformed) some are about these terms. For example, when someone asked what "traditionally" published meant, the answer given was that it means printed as a book (rather than an ebook). No one in Publishing uses the term this way, and nor did Wattpad intend it to be defined this way.

To add to the confusion, answers within the comments are frequently given by other users, not by anyone associated with Wattpad, and these answers are taken as authoritative with no oversight by Wattpad when the answers are inaccurate. Even Wattpad Ambassadors give partial, misleading, or uninformed answers (or outright guesses).

None of this would matter in the long run if the Wattys administrators had the capability to check a story's eligibility. Apparently, they lack that capability.

Finally, the chapter "Legal Stuff" is pretty cut and dry:

What makes this worse is that Wattpad was telling writers their stories were eligible when some were not eligible. This is exactly what happened to me. Because my book was uploaded/updated within the relevant timeframe, and met the word length criteria, a button appeared on the story saying something like, "Your story is eligible for the 2019 Wattys! Click to enter!"

I never clicked that button because I read the rules first, and decided to follow them. The writers of the ineligible stories that won awards presumably didn't read the rules, and given how meandering the rules were I don't blame them. The Submission Form is no longer available, so I don't know if it asked the writer to check a box confirming their story was not already "published". Regardless, it's Wattpad's responsibility, not the entrants', to ensure the winners were eligible.

Wattpad does have an "out" from this mess. Chapter 1 of the rules, the Disclaimer, currently reads: 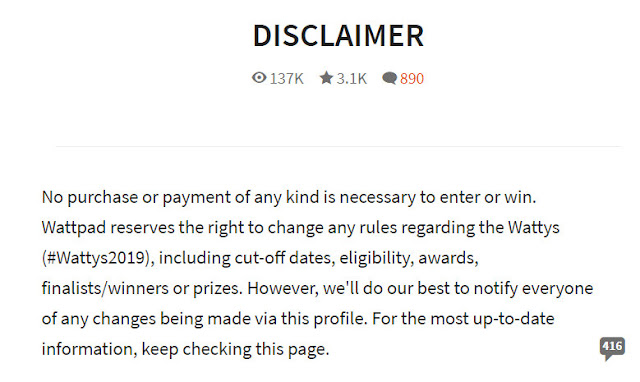 So, all they have to do is retroactively change the rules to allow published works. On the one hand, I hope they do this so that the two ineligible stories can keep their awards. On the other hand... those of us who read and followed the rules, and did not enter our published books even though we wanted to, are stuck being unhappy about the missed opportunity.

What this debacle highlights is that the Wattys need a professional content editor to look at their rules—someone who understands both Wattpad's angle (the legal and logistical side of a writing contest) and the writer's angle (what writers need to know, and how words can be misconstrued).

In addition, they need to reorganize the rules so important points aren't buried, and they need to remove the repetition. Be concise and be accurate, Wattpad. And when you get 102 comments on a contentious or confusing issue, send in someone who knows what they're talking about to address those questions—or, better still, make the rules clear enough to start with.

While you're here, dear reader, download your free copy of Little Sister Song from Amazon. It's a contemporary family drama about a girl who grew up on a cultish commune and escapes to live with her older half-brothers, who discover she shares their musical talent and their painful past. On Wattpad the story has 95,400 chapter reads, 99.9% positive comments, and a dedicated group of amazing readers who have followed the series through to book 7. It'll never win a Watty, but it'll win your heart. (How's that for a tagline?)

UPDATE 2: On 22 October "TheWattys" (author of the Wattys rule book) posted this on their profile:

The science fiction book that lost its Watty was the one that wasn't removed from Amazon (totally understandable from the author's perspective as it appears to be successful there). The rules never use the phrase "an agreement with a third-party provider", but this seems to be Wattpad's way of saying publishing elsewhere is not allowed.

Wattpad's statement uses confusing tenses to blur the events, making it look like the science fiction author did something wrong after winning, and blaming that writer entirely instead of being up front about what happened and how they fixed it (namely, allowing the other ineligible book to keep the award because the author removed it from Amazon). The odd sentence about fostering trust in the community then looks like a jibe about the writer's trustworthiness.

I will say they remain true to form with this redundancy: third-party provider "that isn't Wattpad".

As I already mentioned in this blog, and as one of the commenters on that post says, users were crying out for guidance on eligibility and Wattpad never responded to questions. I think this was the main failing in the way the rules were written this year. There wouldn't be so many questions if the rules were clear in the first place, and when there are questions, Wattpad needs to deal with them with authority.