My daughter and her dad were going through her National Geographic Kids "How Things Work" book tonight, and were reading the chapter on dirigibles, which mentioned the British R101 rigid airship.

This reminded me of a story my dad likes to tell about his father, John (Jack) Creasy, born in 1899. Jack was a chemist whose company, Titanine Ltd., supplied the nitrocellulose paint, otherwise known as "dope", for fabric used to cover the R101. After the ship was built, his team went on a tour of the airship. The story goes that Jack was so horrified by the workmanship, he declined a free ticket for its maiden overseas voyage to India in October 1930. 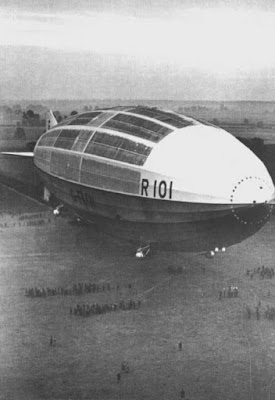 The airship subsequently crashed on that voyage, over France, killing 48 of the 54 people on board.

My dad was born in April 1931, and he and his older sister may well been raised by a single mother had Jack Creasy taken that ticket. For his entire life, my dad was terrified of flying although necessity forced him to take several flights (including to Australia, and back to the UK twice).

Wikipedia has more information about this doomed airship.