Prospect: A Movie Review of Sorts 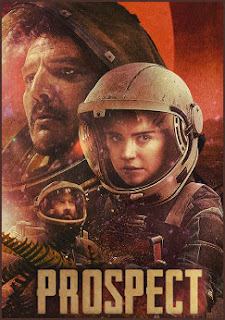 Here's one for my Song of Scarabaeus readers...

I'm constantly disappointed by science fiction movies these days, and after watching Netflix's Prospect (2018) tonight, I've figured out why.

When it comes to science fiction, my favorite trope is "gritty spaceship and rag-tag crew". It's why I wrote the Scarabaeus series. Midway through writing that book, I remember reading about a forthcoming "gritty spaceship with ragtag crew" series called Firefly and I felt like Joss Whedon had extracted it from my head. (My husband now tells me it's all just Starcraft, which I'd never heard of.)

Anyway, I don't know why I like gritty spaceships and ragtag crews but that's my preferred subgenre. The sci-fi tropes I enjoy less are horror elements, bodysnatching in all its guises, a present or near-future setting, or post-apocalyptic setting, supernatural or magical technology, and gimmicks like time travel. There are movies with these elements that I've enjoyed, but they don't capture my imagination so well.


Big sci-fi movies that have spaceships, yet I didn't enjoy, include (off the top of my head) Interstellar, Avatar, and Sunshine.

Compare this list to the movies and series I have enjoyed: Pitch Black, Alien, Moon, Firefly, and now Prospect. But also Attack the Block and District 9, which have... implied spaceships, I guess.

Turns out, it's not just a gritty spaceship that does it for me. What I love about those movies is that the stories are small. Yes, there might be grander worldbuilding and external politics, but these are stories about [ragtag] people, not overlords and world leaders. If the good guys had failed in any of those stories, it wouldn't have changed the world. In some cases it would've been unremarked upon in the wider world/galaxy. Those stories are about nobodies struggling for survival in gritty, realistic worlds.

There's a temptation when we write to always go for the huge story, and in science fiction it's almost expected that this scope will be elevated to galaxy-shattering proportions. I don't know about you, but this can leave me numb. If the human race is at stake, nuance tends to go out the window. Of course we do, and should do, whatever is necessary to preserve the human race. But if, say, a single life is at stake, perhaps a less-than-honorable life, the decisions that individual characters must make become much harder.

Or if the consequences must be far-reaching, I want to see that story from a tiny person's viewpoint.  Firefly's feature film Serenity attempted this, and succeeded for the most part, I think, because it had that ragtag cast of characters we already loved. The Pitch Black sequel Chronicles of Riddick, on the other hand, failed for me as soon as it switched from a small-time adventure tale to politics of Dune-like proportions.

My Scarabaeus series does have galaxy-shattering consequences for at least a portion of humankind, but the books are told from one young woman's point of view exclusively, and the politics is all behind the scenes. Edie finds herself with immense power but her decisions are based on her personal interpretation of events, not on the edicts of higher authorities.

So, I recommend Prospect for a good, simple -- and gritty -- yarn. This is a tale about people living on the edges of society -- families, prospectors, mercs, and settlers -- engaged in a desperate struggle to survive and to move up a notch or two. Their struggles define their moral codes and make heinous acts understandable (if not forgivable). And if they fail, no one cares or even knows about it, other than we the viewers who watched their stories unfold.