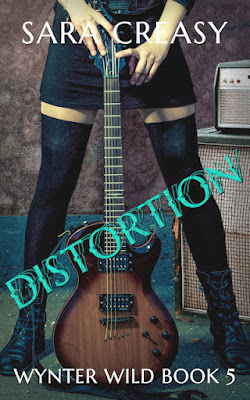 So I've started posting book 5 of the Wynter Wild series to Wattpad, where you can read it for free. The blurb is below.

The title Distortion follows the musical theme of the previous books, and refers to what's going on in this family and in Wynter's life in particular.

Wynter has grown on me more and more as I've been writing these books. She made herself a "blank slate" when she left the cult-like ashram, realizing that to survive she needed to fit in and forget the past. Of course no one can completely put the past behind them, and in Distortion everyone is realizing just how much the past, specifically their mother, still affects them today. It has distorted Wynter's new identity, her social abilities, her concept of love, and her relationships.


Her brothers are also affected, and even their father Harry has been unable to move on since the love of his life left him all those years ago.

In this book, Miriam returns! Writing those scenes forced me to take a deeper look into "who" exactly she is, how she could abandon most of her children, and what she expects from them now, in adulthood. Does she understand how much she hurt and warped them? Is she remorseful?

Distortion for free to read chapter-by-chapter on Wattpad, and it will eventually be an ebook. Watch out for Lost Melodies (book 4), which I'll be publishing too.


Wynter has helped to create a safe place, an eccentric home in the mountain with her older brothers. Her music career is taking off with an overseas recording opportunity and a new all-girl rock band.

She has everything she needs, but her brothers could use some help. Indio returns from London and there's a room waiting for him, if he'll take it, as well as an old flame in the wings. Caleb has a new chance at love, and Jesse continues his search for the perfect girl. Through everything, Wynter maintains her dream of making a success of their band Rule212.

Out of the blue, their mother Miriam returns. Her years of neglect have already distorted her children's chances for love and happiness. Does she stand any chance of reconciliation? Will Wynter and her brothers seek closure on the past, or do they want revenge?

You will want to read books 1-4 of the Wynter Wild series first, as this is a continuing story. In addition to the general warnings below, please note: Wynter does not have sexual abuse/assault in her past or her future. This story is suitable for ages 16+.

Distortion is Book 5 of the Wynter Wild series.