The House on Tiger Mountain 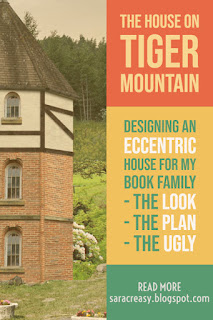 My book family buys a run-down old farmhouse at the end of book 3 (Rhythm & Rhyme) on Tiger Mountain, east of Seattle. It's on five acres of land backing on to a state forest, and is hidden behind a stone wall.

This house becomes a character in its own right in the series, so I spent some time imagining it, drawing the plans, and eventually mocking up a view from the front. The house is eccentric, which in this case is another way of saying *ugly*, built in stages over the years.

I think I have a slight obsession with houses. We grew up with huge drawerfuls of Lego, and all I ever made with Lego was houses. I didn't play with the houses. I just made them. The three most fun parts about making Lego houses were:


This last one was important. When you're constructing a tiny Lego house, you're essentially working in "plan view", looking down on it as you sit on the floor amid a pile of Lego bricks. So to get that 3D view at the end, to actually imagine yourself in the rooms, you need to look through the windows.

I also obsessively drew house plans in my younger years -- ridiculously huge mansions with secret corridors and ballrooms and inside balconies. One of the reasons for my interest was, I'm sure, that I grew up in the most incredible 3-story Victorian house in suburban Birmingham (UK), complete with a deathtrap attic, a secret walled-off room on the top floor, and a purported body in the cellar. 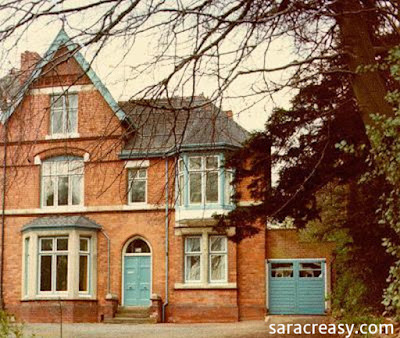 (My room was the one at the very top of the house.)

Here's my mock-up of the farmhouse where Caleb, Jesse, and Wynter move at the start of Lost Melodies, pieced together from Pixabay images. I warned you it was ugly! Click to enlarge. 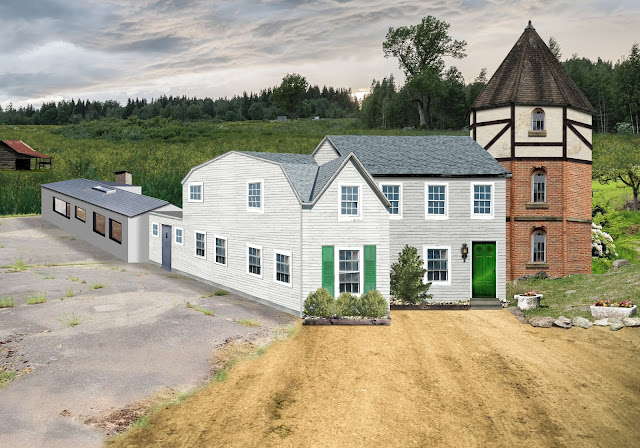 In my next blog post I'll show you the plan, so you can match the windows to the rooms and "walk through" in your head, if you're so inclined. The entire house consists of the original clapboard farmhouse, a newer extension out the back, and the infamous tower with a spiral staircase right through the center. Jesse wants to deck out the tower as a medieval castle, but unfortunately it's scheduled for demolition in the near future. Imagine, if you will, the actual house is a lot more rundown than this.

There is a long deck running along the other side of the extension (not seen in this pic). I may do a reverse view at some point, as that deck and the back yard play an important role.

Missing from this picture is the front wall and private lane leading to the front door; the rickety carports attached to the house on the concrete area, because Caleb pulls them down pretty quickly; and a couple more sheds in the fields.

If you're writing a book in which the buildings are important, are you as obsessively pedantic as me about getting the details straight in your head? For your sake, I hope not...

My next post shows the plan view of the house.