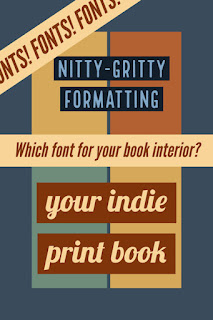 If you're formatting your novel (either the raw manuscript, or an existing ebook) for distribution as a paperback, choosing the main font of the text is one of your most important decisions. After all, it's what your reader is going to be staring at for the next few hours of their life.

Commercial novels usually use serif fonts for the body text (although you'll find sans serif in YA and children's titles). It's allegedly easier to read because the serifs group the letters together so that the eye more easily sees a single word as it travels over the page. Readers are probably therefore more used to seeing serif fonts, and for the body text I think it's a good idea to use them. Chapter headers can be anything you like, of course, as long as they're legible.

Google "best fonts for a novel" and you'll find lots of lists of recommendations. But aside from how the font looks, and whether you can afford it (or whether your free fonts have a commercial license), there are some other considerations. All the fonts mentioned below are free (or come with Word).

Font set
Does the font you've chosen have all the punctuation you'll need? Some fonts don't include basic symbols like an apostrophe, double quotes, exclamation and question marks, hyphens, en- and em-dashes, percentage, forward slash, etc. Make sure your chosen font includes all the signs and symbols your novel requires. And remember that any future novels in the same series may use symbols the current book doesn't.

Check the appearance of en- and em-dashes, whichever you use. Below is a comparison between em-dashes in Garamond and Libre Baskerville:

The Garamond em-dash is lonnnnng (so is Times New Roman's), while Libre Baskerville is shorter with a tiny space on either side, which I like. However, I don't like the appearance of Libre Baskerville in a solid block of text (as above), which is a more important consideration by far to me.

Italics
You're probably going to need an italic version of the font. Even if your chosen font does include an italic set, there are two important things to consider:

1. How does an italic word look in the middle of a non-italicized line? Sometimes the italic set is so different (whether narrower, more compressed, or taller) that it stands out too much and looks like a completely different font. Italics are distracting enough already (they're meant to me, given they're for emphasis) -- but they shouldn't be noticeable to the reader for the wrong reasons.

The fact is, all italic sets in the fonts I like have problems. There isn't a perfect solution. In the Garamond example below, the single italicized word doesn't look too bad but it does look a little smaller than the surrounding text:

2. How do italic letters look when rammed up against symbols such as a question mark, an exclamation point, or quote marks? The italic letters in some fonts actually touch or even overlap non-italicized characters directly next to them, which looks ugly.

In this Garamond example, the italicized question mark touches the closing quote marks, which looks awful:

Another solution might be to italicize only the word, not the question mark or quote marks:

This looks a little better perhaps, although the "s" still touches the question mark. And grammatically, it's not always correct to not include the question mark in the italic phrase. My solution has been to add a tiny (3pt) space between the quote marks and question mark:

Nothing's running into anything else here, but I don't like this font because the quote marks aren't distinct 66s and 99s, which I prefer. (You can also see how the apostrophe is badly spaced in lady's, where it almost touches the y followed by a too-large gap to the s, which is why I no longer use this font at all).

Times New Roman doesn't have these problems, but it's a very old-fashioned font that I think looks odd in modern print. Here it is for comparison:

Similarly, here's Libre Baskerville, which doesn't mess up the italics but it looks to me like it was designed by a medieval monk. Of course, that may be the look you're going for!

Maybe I'm just way too fussy? It comes down to personal preference, but just be sure you know what you're getting yourself into when you choose your fonts.