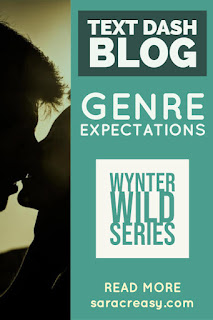 Lost Melodies is the fourth instalment of the Wynter Wild series. Wynter is a teenager, but this series is not YA.

On Wattpad, where I'm uploading the book, readers skew young. The stats say 30% of my readers are under 18, 30% are 18-25, 30% are unspecified, and the remaining 10% are 25+. YA, of course, is read as eagerly by adults as by teens, but the expectations are the same: as a publishing genre, YA by definition deals with teen concerns.

The Wynter Wild series isn't YA. Three of my POV characters are adults, but the New Adult label doesn't fit either because (1) they are male, and (2) their stories aren't romances. I used to refer to the series as a Family Saga although it only covers a few years. An author who rated the series on Goodreads called it "New Adult Family Saga" and I like that... but it's not a genre that publishers recognize. (Publishers need to know where to "shelve" a book and a random crossover is a hard sell.)

In addition to publishing genres, there are Wattpad genres - not only main categories such as General Fiction (where I put this series) and Teen Fiction, but also tags by which readers can search for what they like. My series has certain tags for visibility, such as teen and cult and music, as well as the popular "little sister/older brothers"-type tags (a subgenre I never knew existed when I wrote the series). This subgenre comes with expectations of its own that I can't fulfill...

Namely, Jesse never throws Wynter into a pool, or beats up a boy who hits on her, or calls her a slut for wearing a miniskirt. Not happening. I'm not dissing those stories BTW. I'm saying my story isn't those stories. I wanted to write about three young men who do their best, within their limitations, to lift their sister up, not drag her down with bullying or "overprotective" purity culture. Of course, I recognize this in itself is a romanticized view of siblings, and I'm using the term romance here in the original "fantasy" context as defined by Walter Scott: "a fictitious narrative... which turns upon marvelous and uncommon incidents." The Wynter Wild series is a fantasy.

So, I don't know what genre I wrote - it remains a vague hybrid until a better label comes along.

The characters are dealing with sometimes unconventional situations, but they also deal with conventional issues in what I hope is a refreshing way. I didn't write to genre expectations, so I did whatever the hell I wanted. Putting aside the unusual circumstances of Wynter's past, I'd like to hope that the approach I've taken to her stuttering high school dating/sexual experiences is more realistic and non-romanticized than your typical contemporary teen romance. Sixteen-year-old girls come in all stripes, and some of them wield sexual power. Teen relationships can be sweetly romantic or they can be fraught with embarrassment borne of inexperience.

I think my readers keep reading because, regardless of genre expectations, they love the characters (almost as much as I do). These characters have been through the wringer and there's worse to come, but fundamentally they do not change from the people you love.

Put aside your expectations and, I hope, continue to enjoy!