Writer's Bible: Keeping Track of All the Stuff 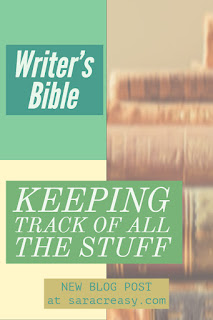 Today I'm talking about bibles ("books" or "scrolls"), a term writers and screenwriters use to refer to their notes.

The more you write in a particular world, the more vital a bible becomes. This can be especially true if you're writing genre fiction, where you're inventing a world. I'm writing a contemporary series and yet somehow my bible has become... huge.

I use Google Docs to organize my work - my straightforward method is simply to apply H1, H2, H3 levels as I go, to organize information, and then go to View / Show Document Outline, which puts your headings down the left side of the document as a quick contents list. Word has the same feature (View / Navigation Pane).

There are two kinds of information that go into my bible:

(1) Research - a typical high school schedule of classes, legal classifications and sentences for assault and drug possession, the progression of sepsis, typical US Coast Guard careers and deployments, Washington weather throughout the year, how long it takes to drive (or bus) from one place to another, the stuff I asked my brother about chess... I may end up using only a fraction of this information. Often it stimulates plot ideas.

(2) Characters - I don't go into physical appearance much beyond eye and hair color, and sometimes height, but because the siblings talk a lot about past events there's an array of important things to keep track of: birthdates so I know which birthday is coming up and what year they're in at school/college, who they were dating and when, what vehicle they drive.

Then there's their opinions on various subjects, so I can keep them consistent: what do they think about relationships, God, their mother? I keep pieces of dialogue that I haven't found a place for, or that I've cut from elsewhere but hope to use. In addition, I collect ideas relevant to the characters like tattoo ideas and song title ideas. (I also have a Pinterest where my characters pin images they like.)

I have a pretty detailed spreadsheet or timeline of each character's life (from birth!) including all the places they've lived (the brothers moved around a lot as kids) and their progress through school, college, and jobs. Here's a snippet from the brothers' childhoods (much of Caleb's early timeline is taken up with their mother's goings-on as it affected them all). 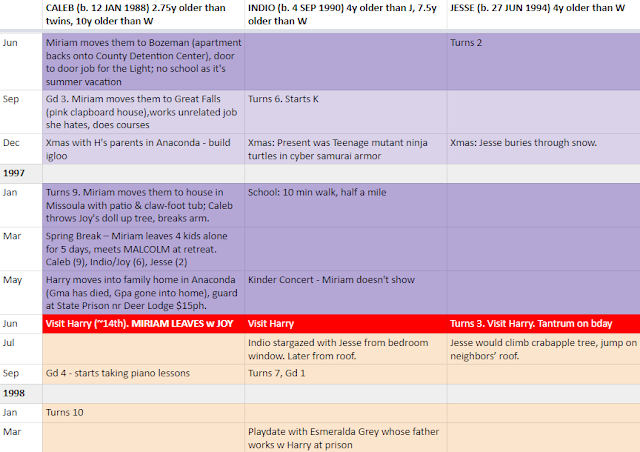 Whenever I write a new story about their past, the timeline helps me find the best time to set the story, and then I slot it into the spreadsheet.

I also keep a list of every single name I use (even animal names) to ensure I don't double-up, with a column explaining the character's purpose in the story (e.g. "Jesse's girlfriend"), a brief physical description (if given), along with when they first appear in the story. Over the course of a million words, I obviously use a lot of names! I try not to pick ones that are too similar, or have too many starting with the same letter. I overused J names in the first couple of books, so now I avoid J names for new characters.

And on top of all that, I have lots of plot and character arc notes, showing my plans for each character over the course of the series, and personality notes to generate ideas for conflict and growth. See my blog post Personality Typing for Made-Up People.

What are the tools and techniques you use to keep track of your world? I'd love to know how other writers approach this.