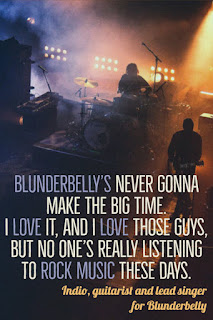 In my Wynter Wild series, middle brother Indio plays in a college band called Blunderbelly. It sounds like a name they dreamed up while drunk or high, and I have no idea how it came to me as I was neither at the time...

Blunderbelly's never gonna make the big time. I love it, and I love those guys, but no one's really listening to rock music these days.

Blunderbelly consists of Indio Fairn on lead vocals and guitar, Turk on lead guitar, an unnamed bass player, and Eduardo on drums (who could use a lesson or two from Jesse, according to Jesse). They play a mix of covers and original music.

To give you an idea of the sort of music Blunderbelly plays, here's a list of songs that sound like them.

These singers don't necessarily sound like Indio -- it's just how I imagine the band's overall music style. Also, other songs by these bands aren't necessarily how Blunderbelly sounds, either.

For those on Spotify I've included direct links.


The High Road - Three Days Grace
Demons - Imagine Dragons
Shipwreck - USS
Stardust - Gemini Syndrome
Trenches - Pop Evil
Get Stoned - Hinder
Bad Romance - Jay Smith (okay, they might play this for a laugh - and Jay Smith is perhaps the closest to how Indio sounds, i.e. melodic but rough around the edges)