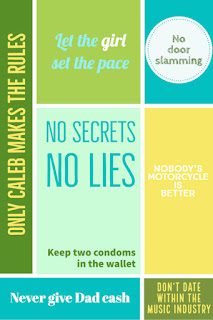 By the time Caleb was a young teenager, he had pretty much taken over running the household. Over the years, he established a lengthy unwritten list of house rules to keep control over his brothers (and later, Wynter). Here's a list of most of the rules mentioned in the books (including later books you won't have read yet). The numbering system is a "running joke", as Indio describes it -- a number is given whenever the rule is mentioned (and listed here), but they're not written down in the Fairn household and change randomly.

Although rule 1 states only Caleb makes the rules, his siblings have given it a shot now and then, as you can see.

So... would you survive in Caleb's house? The full table of rules follows...