In my last post I talked about my reasons for using Wattpad, and how my first two books are doing since I started uploading them, chapter by chapter, about 6 weeks ago.

I wanted to share a few thoughts about how this method of sharing my books differs on a more personal level with the two sci-fi books I had published a few years ago.

Most obviously, Wattpad doesn't pay (although there are ways to monetize your writing). My alternative was to self-publish straight to Kindle and other ebook formats. In the end I decided not to do this because I had zero audience (given this is a different genre and it's been years since I published). The sheer size of the ebook store on Amazon makes it unlikely anyone would find my books before they sank into oblivion. [read more]


There are multiple ways to market your own books to give them the best possible chance on Amazon. In the modern era of self-publishing, a lively social media presence is apparently essential, and I suck at social media. I just wasn't ready to go down that road with these books, although in the future I still intend to release them on Amazon, with at least the first couple being free.

Back to the personal stuff.

While many writers are essentially introverted hermits (puts up hand), we do love people -- it's why we write about them. We love hearing from people who like what we wrote, because one of our aims is to get through to you, to affect you, to make you care for our characters, to anticipate what happens next.

When my sci-fi books were published, back when I used almost no social media at all (other than this blog), feedback from readers came in the form of professional and blogged book reviews, Amazon/Goodreads book reviews, and fan mail. All those forms of feedback are valued, but I especially loved getting fan mail because the reader was personally reaching out to me, not just to other readers, and I was able to respond personally.

The comment system on Wattpad is kind of like a quick n' easy fan mail, in that it connects me directly with readers as they read, rather than when they're done. When someone writes "I hate Bea!" (one of the brother's girlfriends in Little Sister Song), even though I didn't write Bea to be hate-able, I love that an imaginary person I created has the power to inspire that much emotion in a real-world person. I got... something through to that reader, even if it wasn't what I expected. And I get the chance to defend poor Bea there on the spot (without getting defensive -- that's a fine line, but it's all in good humor). (Seriously, though, Bea's a nice girl!) 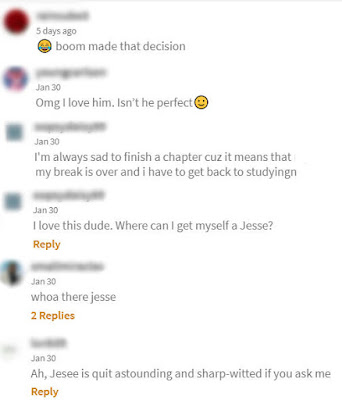 So far, I've received 99.9% supportive and enthusiastic comments from wonderful, engaged readers. (The majority of my readers are "silent" and I love them all, too!) On the right is an example of "instant feedback" from a chapter I posted a couple of weeks ago. I worried younger readers (in particular) wouldn't like Jesse because he's a bit full-on... so it's nice to see him get some love.

Because the books are complete offline before I started using Wattpad, I don't use comments to direct or inspire future chapters (as some writers do). They're purely my chance to see how all these plain words on my screen have turned into genuine emotional responses in real human beings out there. It most definitely makes it all worthwhile.

In my next post I'll talk a bit more about the "genre" on Wattpad that the Wynter Wild series does, and does not, fit into, and whether it matters.

If you write on Wattpad, what's your impression of the comment system? If you read on Wattpad, are you a "silent reader" or do you enjoy offering your reactions and interacting with authors?