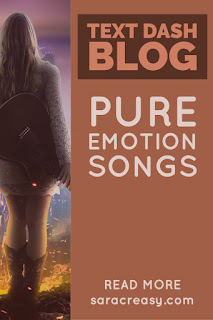 I know, I know, you disagree! Maybe with all five. But don’t blame me. These are Indio’s “pure emotion” songs, meaning, according to him, they bypass the cerebral cortex and drive directly into the brainstem. The list is guitar-heavy because he’s guitar-heavy.


These songs aren't my "songlist" for writing to—I prefer instrumental music for that. Indio is the middle child, a musician and songwriter who also expresses himself through art. When his sister Wynter shows up with her half-formed musical talent and non-standard interpretations, he teaches her what he knows—starting with the blues turnaround, of course. For a short period in her childhood she had access to a radio and listened to classic rock stations. These five classic songs (and bonus), aren’t radio-friendly for various reasons, so she’s never heard them before but Indio considers them essential listening. (Song squares by me.)
.
.
.


Bonus #2!
Just for fun there’s a babies’ version of Whole Lotta Love by Sweet Little Band—check it out on Spotify.

Which songs give you the feels?