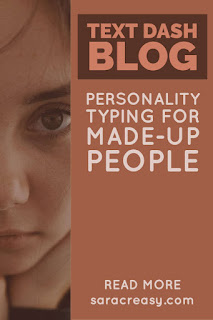 In the past I've typed characters at the start of the writing process. Whether or not you have a large cast, it helps to keep personalities distinct. You probably already have broad characters in mind at that point. Reading through personality types to find ones that "match" can help hone the characters.

A few systems to try (I've provided a link for each, but there's loads more info available by Googling, including zodiac signs if you're looking for more arbitrary ideas):

Once you've established types, you can read about how each type behaves when healthy or—and this part is critical!—emotionally unhealthy (stressed). You can find their perfect (or imperfect) romantic partner, their ideal job, how they view friendships and authority and ethics and... a host of other things useful in creating drama.

I didn't initially type my main characters in the Wynter Wild stories, but after the characters evolved over the course of half a million words I did type them as an exercise (using Myers-Briggs, as that's the system I'm most familiar with), and it generated loads of new ideas. I could then look at how these types interact with each other, where conflict was likely to occur, what relationship issues they might face, what their life goals are, how they react under stress, and so on.

I've used many different personality websites over the years, but this one has a pretty extensive and easy-to-read coverage of each Myers-Briggs type. So, here are the five siblings by personality type:

Caleb—ISTJ "The Inspector"—I already knew Caleb was the "just fix it!" guy, and the rest of this description fits him, too: hardworking, trustworthy, earnest, and takes a practical approach to everything. Sets high standards. Failure is not an option! He has good intentions but may not always understand others' emotional needs, causing him to be unintentionally insensitive. He becomes stressed by disorganization or when forced to do something that makes no sense to him, and this makes him rigid, angry, or despondent. These traits served him well as a teenager, when he took over parenting his younger brothers and protected them from an alcoholic, sometimes violent father. But as the boys have grown up, he's starting to realize he needs to cut them some slack. When Wynter shows up in his life, he's conscious of taking a different approach.

Indio—INFJ "The Advocate"—Creative, inspired, protective, independent and somewhat mysterious. He finds it hard to open up but is affectionate with friends, insightful and sensitive to their moods. He's hard on himself when he makes mistakes, and needs to be around forgiving people. He absorbs others' emotions, which can overload him, so he needs alone-time. He's not interested in the surface of things—he always has to look deeper. He understands the world through symbols, illustrations, and other abstract means. All ideal traits for a songwriter and artist! He gets stressed by having to focus on concrete details, being interrupted, having his values violated, or other forms of discord. This type is prone to over-indulgence or substance abuse when under stress, and Indio's been under stress since he was six years old.

Joy—ISFJ "The Defender"—A healthy person of this type has an amazing ability to connect with others, and is patient, loyal and reliable, with a genuine desire to do good. Joy is not emotionally healthy. Not only was she raised in an isolated place and brainwashed to believe the outside world was dangerous, she's now living on the outside and unable to accept help from the people who are offering love and acceptance. While she believes she's doing good, she's lost her enthusiasm, represses her feelings, and her loyalty is often directed toward the wrong things. Overwhelmed by a new world, she's easily taken advantage of.

Jesse—ENTP "The Debater"—Enthusiastic, intelligent, cunning, gregarious. He uses charm to get what he wants out of others and finds everything interesting. Analyzes problems from all angles to come up with unique solutions. Easily connects with people (even if superficially) because he can find a common interest. Uninterested in money or authority. He'll always give his honest opinion and it will derive from logical reasoning rather than emotion. He's stressed by rigid rules and being micromanaged, lack of stimulation, incompetence in others, and being forced to focus on details—this causes him to become overwhelmed with fear and anxiety and feelings of inadequacy and he becomes uncharacteristically quiet and depressed. Jesse is the only extravert in a house of introverts. He shares an intuitive superpower with Indio, but the two approach life very differently and are otherwise on different wavelengths.

Wynter—ISFP "The Composer"—I mistyped Wynter initially, a bad mistake because she's the main character! Once I fixed this, everything fell into place. Her natural personality has been curtailed because of her childhood experiences, so she's learning to become the person she's supposed to be: a true artist who experiments with traditional expectations of beauty and behavior. She lives in the moment rather than dwelling on the past (which frustrates Caleb) or future (which frustrates Jesse). She occasionally has a short fuse but quickly gets over it. She's sensitive to others and values harmony. She guards her emotions so she's difficult to get to know, and is prone to being self-centered. She's uninterested in debate and needs supportive, non-judgmental friends. She wants to do what's right and to be authentic.

If you're a writer, have you have tried typing your characters? Did you do so before or after you started writing? Has it helped?