Ignore this tip: Up the stakes! 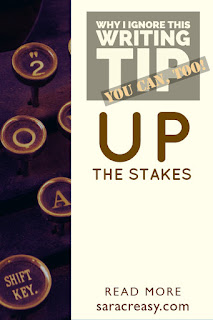 
Heard this before from agents, editors, bloggers, craft books, or critique partners? If you’re writing genre fiction, this may be good advice. A murder mystery (usually) needs a dead body. A thriller probably needs several. A courtroom drama needs some broken laws, the more salacious the better. A science fiction novel needs a species, a spaceship, a planet, or perhaps an entire galaxy at stake.

There have always been quieter novels written in these classic genres. My current series is a family drama without a steadily rising body count or a terminal illness—and, I hope, without melodrama. And yes, I’ve been told by professionals to “Up the stakes!” as well. But I don’t believe external drama or even manufactured friction between characters is always the key to writing a compelling, satisfying story.

In The Emotional Craft of Fiction, Donald Maas talks about the heart in your story coming not from your character reacting to terrible external circumstances, but from the character's inner turmoil, their need and yearning:

Mile-a-minute thrillers can leave us cold and heavy-breathing romances can make us roll our eyes. On the other hand, stories that have no precedent, little action, a quiet voice, and a mundane setting can move, shake, and change us.


We can create drama from our characters’ personal needs and put them in emotional rather than physical danger. One of my POV characters Caleb is a 24-year-old Coast Guard whose need is to do his duty to his own satisfaction (and he has very high standards). Duty to country and to family are one and the same to him. He only knows how to express love through duty. He’s spent his working life on international waters doing dangerous and dramatic things, which could be the premise of a totally different novel, a thriller or spy novel, perhaps. But in Little Sister Song the personal drama I created for him is far more interesting to me: his sense of self is under threat because his efforts to do his duty back home are being thwarted. The authorities he always respected are breaking up his family. The woman he loves isn’t being supportive. The job he loves is incompatible with his family's needs. No one dies, no one is kidnapped, no one gets a terminal illness, but the stakes are high because his previously unshakable self-confidence and self-control are crumbling. When failure is not an option, he stands to lose his self-respect if he fails.

Let’s look at how to merge these personal “stakes” with plot. We talk about a double arc in fiction: the external (plot) arc, and the internal (character) arc. One drives the other, or more accurately they both drive each other. Different genres weigh the importance of the internal and external arcs differently. The James Bond movies are spy thrillers—all plot arc and no character arc (James Bond has a distinct character, of course, but a weak arc). The most recent Bond films developed his character arc, and to me it felt weird. It wasn’t “James Bond” anymore—the movies had switched genre and suddenly James Bond was a child with a haunted past. James Bond as family drama? Didn’t work for me because of the decades of movies that came before. (As a standalone story about someone not called James Bond, it may have worked fine.)

On the other hand, romance novels (unless they’re cross-genre) are often mostly character arc, with the plot playing a minimal role. The plot pushes the characters together and apart, until they complete their character arcs and confront their feelings. There’s nothing wrong with writing any mix you like, but when you hear “Up the stakes!” it can feel like you’re being pressured into adding external drama.

Here’s a rule of thumb: As soon as our characters require a 911 service—car accident, murder, kidnapping, illness—we’ve created an inherently dramatic situation that may detract from the more interesting drama stemming from characters’ decisions, relationships, mistakes, foibles, anxieties, etc. This is not a reason to avoid those hyper-dramatic situations (I'll admit to writing a few) but it’s something to think about before you start putting characters in peril in order to manufacture drama.

Unless we’re writing genre that we feel demands it, let’s not feel pressured into upping the stakes by adding external drama when there’s so much drama to be mined in the complex relationships between people who care for each other, who thought they were loved, who suffer or commit betrayal or indifference, who suppress stuff, who admit to stuff… These realizations and revelations can drive plot as effectively, and be more emotionally affecting, than standard high-stakes tropes.

Are you writing with "a quiet voice"? Are you going all-out for high-stakes drama? Or are you somewhere in between? Which stories do you prefer?