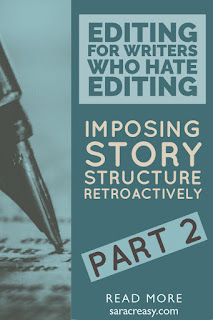 In part 1 of this two-parter we looked at how to create a structural template for your panstered first draft. Today we'll complete the process by using the template to look for holes and pacing problems.

Looking at my Little Sister Song structure, my theme is stated in two parts: Wynter has found home (8%) but Joy got left behind (5%). As the story proceeds, we learn they are all counting on Joy to hold the family together (will she or won't she?), so this becomes more important later. The reader doesn't need to be beaten over the head with theme and may not realize the sentence they just read was, in fact, a statement of the theme. My reference is fairly vague and I think that's fine. But if, at around 5%, you haven't introduced any concept of what the story is about (and I don't mean a lofty idea like Love Conquers All, but a personal, tailored idea for your characters to explore), now is the time to figure out how to do that.

6. If you have entire sections missing (say, the Debate section, which roughly corresponds to "Refusal of the Call" in the Hero's Journey), it's time to think about why. Save the Cat assigns over 10% of your total word count to this section. Now, I don't think it matters whether it's 5% or 15%, or whether it starts on page 7 or page 30, but you probably do need to show what the MC thinks about her possible futures. What are her options? What do the other characters think about it? What happens if she does or does not take this path?

7. By comparing your story to each major "beat" or section of the structure, analyze areas you may need to expand or reduce, perhaps simply by shifting scenes around, perhaps by writing more or deleting entire scenes. I find that the simple act of imposing a structure paradigm on my draft generates loads of new ideas for how to add drama, strengthen the existing plot arc, develop characters, and illuminate the theme.

8. Leave your subplots until last (unless ideas pop up along the way). They should have their own (simplified) arcs that tie into the main plot. Structure paradigms can help shape those stories, but I think you can be a lot more flexible. Also, the main and subplots are going to end at different moments. Your subplot might be having its climax while your main plot is wallowing in a Dark Night of the Soul. (Better still if Subplot's climax affects in some key way Main Plot's Dark Night of the Soul.)

9. Once you've figured out which areas need work, adjust your scene-by-scene outline, noting for each scene what needs to be changed, and noting where new scenes need to be added. Sometimes these new "scenes" may be just one sentence that emphasizes a point, states a decision more clearly, or ties two scenes together. You can now shift around sections of your draft (back up first!) to match the new outline. I use asterisks at any place that needs to be checked, fixed, or added to. I delete asterisks as I go, so at any time I can "search" for * and jump to places that need attention. Oh, the joy when that search returns no results!

10. You probably worked all out of order, so go back to the start and read through the entire story. You're checking for overall cohesiveness as well as the nitty gritty such as whether timelines match up.

Remember, these structure paradigms are only guidelines to track down issues with your plot and character arcs. If one simply doesn't match up with your story in any respect, try another. While they are all essentially the same, one may speak to you more clearly than the others.

In a later post I'll be looking at exactly how to rewrite scenes, or write new scenes, or re-structure existing scenes, to make them more effective. In essence it's a microscopic version of this same process and a very satisfying one, too.