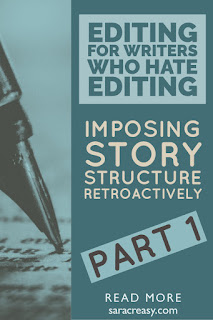 In a previous blog I looked at why “outline first” is not always a useful writing tip, because it can detract from the creative joy of producing words on the page, otherwise known as your first draft.

I have a better use for outlining, and it’s after your first draft is written. The techniques of outlining that you're probably already familiar with can bring order to your existing story, and more importantly uncover pacing and plot problems.

As with all editing tips, the key is to work in an organized manner, choosing your preferred tools, and using them effectively. My preferred tools are Google Docs (or Word), one of several traditional story structure paradigms, and occasionally a million or so sticky notes. If you work with Scrivener or another writing program, these programs have inbuilt structuring tools. I'll focus on a simple word processor, but you could use the same techniques with pen and paper.

So, you have a first draft and it's a bit of a mess. You didn't outline much, if at all, you just blurted it all out because you felt inspired and creative. Excellent! I wrote hundreds of thousands of words in this way over the past two years and was then faced with the monstrous task of organizing my scenes chronologically and dividing my megadraft into books and chapters (I don't write in chapters). Let's assume you took the more sensible route of just writing the one book, of letting it flow, and now you have a bunch of scenes to knock into the shape of a cohesive story even though you have that nagging feeling you forgot to include a first act turning point and your villain failed to complete her character arc.

My suggested method of imposing structure goes like this:

1. Choose your preferred story structure paradigm. I used to work exclusively with the Hero's Journey (or one of its offshoots) because twenty years ago there wasn't much else being taught. More recently I've found these useful:
2. Write out this structure as bullet points, noting what percentage (or word/page count) each part is supposed to occupy. For Snyder's beat sheet, the start looks like this (I suggest changing the cumulative percentages into page numbers relative to the length of your completed first draft):
3. Summarize every scene of your draft into 5-10 words (just enough to remind you what happens) and include the word count for each scene. Ignore chapter breaks! Include subplots if you want, but I would put them in a different color. Also include, where possible, the "point" of the scene or any major decisions a character makes. For example, these are the opening image, theme (shown in italics) and set-up scenes from Little Sister Song, with cumulative percentages of the 105,000 word total):

4. Slot these little summaries, in order, into the story structure as headings. Don't worry if the page they appear in your manuscript doesn't match what the structure dictates (catalyst is at 4% instead of 11%?—that's okay for now). Don't worry if your scenes don't match up with what's "supposed" to happen in the structure (e.g. you have no "debate" section to link the catalyst with the break into act 2?—that's okay for now).

Right now your manuscript is looking pretty scrappy. Things have to get worse before they can get better! We'll look at how to complete the process in Part 2.

How do you deal with the initial structural editing of your first draft? Particularly if you didn't outline first? Who's your go-to story guru? I'd love to hear your ideas.